Cam Newton on podcast: 'There's not 32 guys better than me' 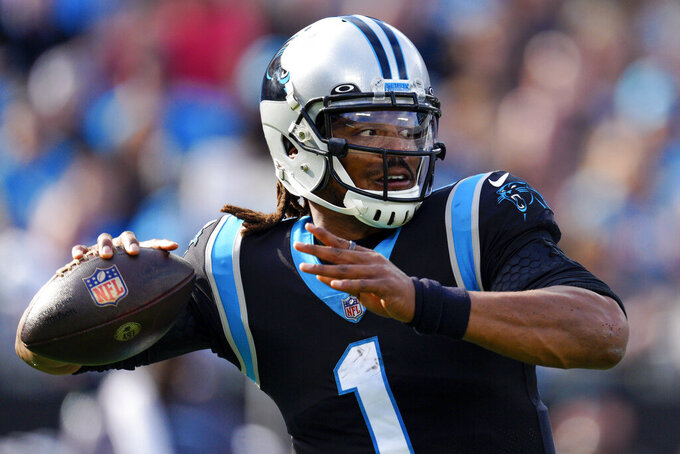 FILE - Carolina Panthers quarterback Cam Newton passes against the Tampa Bay Buccaneers during the first half of an NFL football game on Dec. 26, 2021, in Charlotte, N.C. Newton, who still considers himself one of the top 32 quarterbacks in the NFL and remains an unrestricted free agent, said people’s perception of him has changed largely because he put himself in bad situations the past two years with the Carolina Panthers and New England Patriots. (AP Photo/Jacob Kupferman, File)

Cam Newton still considers himself one of the top 32 quarterbacks in the NFL.

But Newton, who remains an unrestricted free agent while mandatory minicamps begin around the league, said people’s perception of him has changed largely because he put himself in bad situations the past two years with the Carolina Panthers and New England Patriots.

“I signed on Thursday. I played on Sunday,″ Newton said of his experience last year with the Panthers during an appearance on ‘The Pivot Podcast.’

“At what point did you think you was going to be successful? The next week, I started. That’s still under 10 days of you being on the team. And you’re still trying to learn the offense.

“So before I sit up here and allow the narrative to be made that Cam ain’t got it no more, Cam is taking full responsibility and saying Cam put himself in a (messed) up situation, which then had a ricochet effect to" how people think of me.

Newton scored two 2-yard touchdowns — one running and one passing — the first two times he touched the ball for the Panthers in 2021 in an upset win at Arizona, making for a grand return.

He was seen on TV saying “I'm back!" after the first score.

But things pretty much went downhill from there.

Carolina's No. 1 pick in 2011 was thrust into the starting lineup the following week and lost five straight starts before being replaced by Sam Darnold, who was coming off a shoulder injury.

It didn’t help that Carolina had one of the league’s worst offensive lines.

Panthers general manager Scott Fitterer said earlier this offseason that he's not ruled out re-signing the 33-year-old Newton, but there is no indication at this point that a deal is in the works. Newton would likely have to accept a backup role behind Darnold, and it's unclear if the 2015 league MVP would be willing to do that at this point in his career.

“There’s not 32 guys better than me,” Newton told the podcast. “If you think I couldn’t be on somebody’s team right now, you’re a (darn) fool.”

Newton said he wants to play for a team that would offer a good supporting cast and give him more time to learn the system. But as of right now Newton is once again missing valuable time to learn a playbook while not on a roster.

In 2020, Newton joined the Patriots in June and said he never got a chance to fully learn the offense there, either.

After Tom Brady left New England for Tampa Bay, Newton went 7-8 as a starter with eight touchdown passes and 10 interceptions for the Patriots. He was re-signed after the season, but the Patriots abruptly released him in training camp after coach Bill Belichick chose to go with first-round pick Mac Jones at quarterback instead.

“The New England experience was a (messed up) situation,″ Newton told the podcast. “I was still learning the offense seven to eight weeks into the season.”