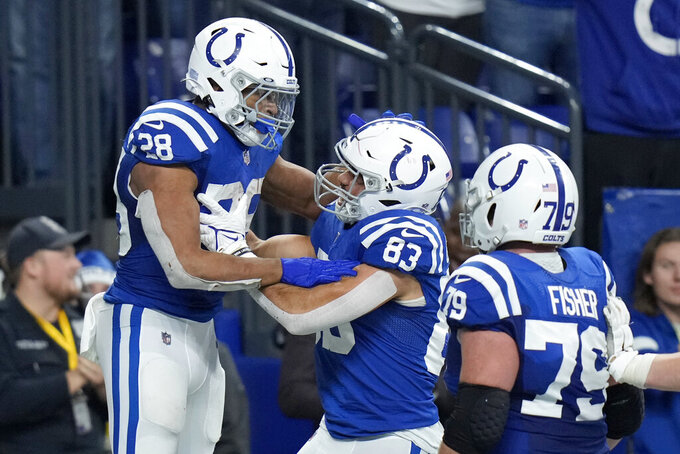 Indianapolis Colts running back Jonathan Taylor (28) is congratulated by Kylen Granson (83) and Eric Fisher (79) after scoring on a 67-yard touchdown run during the second half of an NFL football game against the New England Patriots Saturday, Dec. 18, 2021, in Indianapolis. (AP Photo/AJ Mast)

GLENDALE, Ariz. (AP) — The Arizona Cardinals failed to clinch an elusive NFL playoff spot after losing to one of the league's worst teams last week.

They'll get another chance against arguably one of the league's best.

The surging Indianapolis Colts (8-6) travel to face the sliding Arizona Cardinals (10-4) on Saturday. It's just the third time the Cardinals have played on Christmas Day, while the Colts will be making their franchise debut on Dec. 25.

The standings say the Cardinals are a better team than the Colts, but that hasn't been the case in recent weeks. The Cardinals have lost four of their last seven games, including their last two. The Colts have won five of six, including a 27-17 win over the Patriots last weekend.

If the Cardinals clinch a playoff spot for the first time since 2015, they'll likely have to earn it against the Colts, who lead the NFL with a plus-14 turnover margin. The Colts are currently in the No. 5 spot in the AFC playoff chase.

“It’s a great team. There’s no sugarcoating it," Cardinals quarterback Kyler Murray said. "They’re a great team, a lot of talent over there on defense and offense. We’re going to have to be ready for it. This is December football. It’s a playoff-like atmosphere on Christmas. They’re going to be ready. We've got to come to play.”

The matchup features some of the league's best running backs.

The Colts' Jonathan Taylor already has 1,518 yards rushing this season and needs one more 100-yard game to tie Edgerrin James for the second most in team history in one season.

The Cardinals' James Conner doesn't have as many yards on the ground, but has been a touchdown machine, finding the end zone 16 times to make earn his second Pro Bowl nod.

“If you’re winning the rushing title, that means you’re doing a great job at running the ball, which could ultimately, probably lead to that end goal,” Taylor said. “But there’s been guys to win it before and not obtain a Super Bowl.”

Taylor is running away with the NFL rushing title.

He has topped the 100-yard mark in eight of the last 11 games, posted 100 yards from scrimmage 10 times in those 11 and has scored at least one TD in a franchise record-tying 11 straight.

This weekend, he’s on the verge of more milestones.

He can match James’ single-season franchise mark (nine) if he runs for 100 yards. And one more score will tie Earl Campbell, Terrell Davis, Larry Johnson and LaDainian Tomlinson for fourth-most in one season in NFL history.

Murray hopes to bounce back from a mediocre performance against the Lions last week. He wasn't terrible, but missed on a few throws and finished 23 of 41 passing for 257 yards, one touchdown and one interception.

The Cardinals quarterback has benefited from solid protection from his offensive line most of the season. He showed his thanks last week by buying personalized golf bags, fitted clubs and other goodies for all of the big men that keep him upright.

“I don’t golf too much. I can putt, but I can’t hit the ball," Murray said. "It was a collective idea. Me and my parents kind of thought about it. Had some help from a lot of people to make it happen, so it was a good deal. They got their own custom bag, custom set of clubs, some alcohol. Just some stuff.”

Indianapolis might be without starting center Ryan Kelly for the third straight week. Last Saturday, he didn't play after his newborn daughter died. Kelly posted an emotional message on social media Monday afternoon, confirming the death.

Second-year center Danny Pinter replaced Kelly in both games and the Colts ran wild in both wins.

Kelly did not practice Tuesday and Wednesday, and team officials will let Kelly decide when to return.

“What we’ve said to Ryan is take all the time you need. We’re 100% behind you and Emma,” coach Frank Reich said, referring to Kelly’s wife. “We’re 100% here to support you, and when you’re ready to take that step, then we’re right here. I’m not going to push that.”

Kelly showed his exuberance over being a “girl daddy” during a baby reveal at Lucas Oil Stadium that was featured on a recent edition of “Hard Knocks In Season: The Indianapolis Colts.”

The Cardinals have had a strange season in that their road record (7-1) is much better than their home mark (3-4) at State Farm Stadium.

Arizona's record at home should probably be even worse. The Cardinals got a break in Week 2 when the Minnesota Vikings missed a potential winning field goal from 37 yards in the final seconds.

Cardinals coach Kliff Kingsbury has been asked numerous times about why the team's home field hasn't been friendly this season. He hasn't had much of an answer, but Saturday would be a great time to solve it.

“We’d definitely like to get that figured out before we wrap this season up," Kingsbury said. "We’ll continue to try to address those things, and hopefully the next one, we can play one of our best games.”