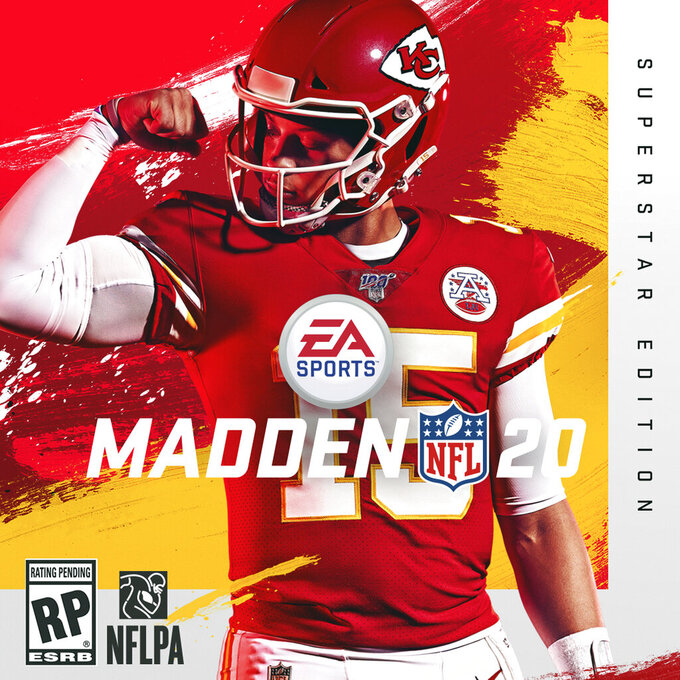 This image provided by EA Sports shows the cover of the Madden 20 video game, featuring Kansas City Chiefs quarterback Patrick Mahomes, which will be released in August. (Photo courtesy of EA Sports via AP)

Patrick Mahomes has gone from playing the Madden video game with his dad to being on the cover.

Electronic Arts announced Thursday that the Kansas City quarterback and reigning NFL MVP will grace the cover of "Madden NFL 20" when it is released Aug. 2. The announcement was made before the first round of the NFL draft.

"It is awesome and definitely a full circle moment for me," Mahomes said during an interview with The Associated Press before the cover was revealed.

In his first season as the Chiefs' starting QB, Mahomes threw for 5,097 yards and 50 touchdowns during the regular season and led them to the AFC championship game for the first time since 1993. He began last season with an overall Madden rating of 77 but finished the season with a 94.

Mahomes said he was approached by Electronic Arts prior to the Pro Bowl in late January about appearing on the cover. He also has given a lot of input on the development of the Face of the Franchise: QB1 feature that will be in this year's game.

The feature allows players to create their own quarterback to play through the College Football Playoff, NFL combine, draft and career with a team.

"It has been great to be able to discuss my experiences going through everything, especially the draft process, and to see how that will develop in the game," Mahomes said.

Mahomes, who is an avid video game player, said games like Madden have become more realistic and that the same concept of reading a playbook applies to learning football.

Appearing on the cover has also had a stigma attached at times. Most of the cover athletes during the first 10 years suffered significant injuries the year they appeared. Recently retired Patriots tight end Rob Gronkowski was the most recent player to be beset by injuries when he started only six games in 2016.

Wide receiver Antonio Brown, who was traded from Pittsburgh to Oakland during the offseason, was on the cover last year.