Chiefs' Reid headed back to Super Bowl after long absence 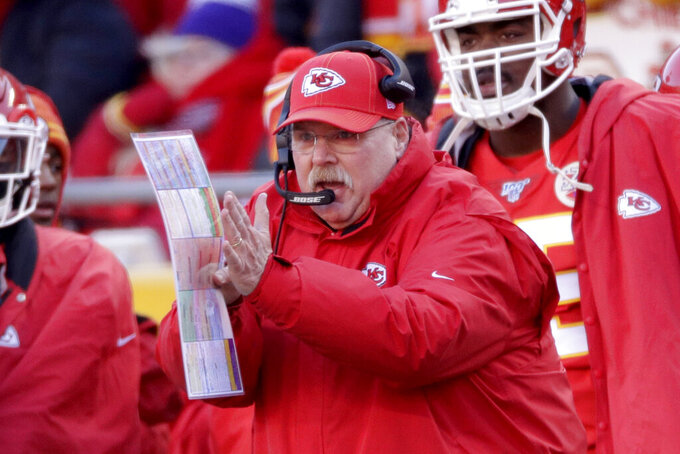 KANSAS CITY, Mo. (AP) — Andy Reid sat inside a small dorm room on the campus of Missouri Western State six months ago, right as training camp got underway, and lamented for a moment how close his Kansas City Chiefs came to the Super Bowl last season.

On Sunday, the coach affably known as “Big Red” was at the epicenter of a big party.

After guiding his team through a litany of injuries this season, including a scary knee injury to star quarterback Patrick Mahomes, Reid pushed the Chiefs across the finish line. They rallied from an early 10-point hole against the Tennessee Titans for a 35-24 victory in the AFC title game that earned the Chiefs their first trip to the Super Bowl in five decades.

“Driving us through training camp and into the season, when you have great expectations like this team has, to be sitting here today, that's a challenge — a lot of things have to happen,” Reid said. “Guys have to be able to check their egos at the door. There are ups and downs, not getting down on each other. I'm proud of the guys for doing all of that.”

Now, Reid is headed back to the big game for the first time since the 2004 season, when his Philadelphia Eagles lost to the New England Patriots. Only his good friend Dick Vermeil went longer between trips to the Super Bowl.

“He's no-doubt a Pro Football Hall of Famer, and he's going to his second Super Bowl and hopefully get a victory,” Chiefs owner Clark Hunt said, “and as a family, we're as excited about him getting a chance to get that victory.”

Reid made it back with a steady hand. Creative play-calling. Unwavering confidence.

“We go out there every single day and we see Coach Reid and how much work he puts in, and it transfers to this whole team," said Mahomes, who threw for 293 yards and three touchdowns while running 27 yards for another score — a tight-rope walk down the sideline that will surely fill playoff highlight reels for years to come.

They did that for a long stretch Sunday.

After falling behind by double-digits for the third consecutive playoff game, Reid managed to keep the sideline calm — just as he did when the Chiefs rallied from a 24-0 hole in the divisional round against Houston. He stuck to the game plan, managed to get Mahomes and the offense going, and the result was a 28-point run that put Tennessee on its heels.

The Chiefs capped their first AFC championship since the 1969 season by beating the Titans at their own game, running Damien Williams for a series of first downs that drained the clock and prevented any notion of a comeback.

When the Chiefs forced a turnover on downs to seal the victory, Reid walked all the way down to the 10-yard line to catch defensive tackle Chris Jones coming off the field. They hugged each other tightly, then Reid walked over and did the same to Terrell Suggs, the veteran defensive end who joined the Chiefs in the final couple weeks of the regular season.

“I’ve thought about this a lot. Nobody deserves it more than Andy,” Chiefs special teams coach Dave Toub said this week. “He’s such a great coach. To not have a Super Bowl win under his belt – this would be huge. I don’t know if I’d stop crying with him. I’d probably hug him forever. I’m just so proud of what he’s done and everything he’s done in his career.”

The hugs continued Sunday as the clock hit zero and players rushed onto the field.

“The way Coach Reid does things, coming in 2013, we’re lucky to have this guy to even come into this small-market team,” Chiefs punter Dustin Colquitt said. “The only thing we ever heard was ‘small market, small market, small market,’ and then all of a sudden, Andy Reid is here and it’s crazy. It’s kind of changed the trajectory.

“Of course you want to win one for Big Red,” added Colquitt, the longest-tenured member of the team. "Everybody says he’s a player’s coach and I don’t think that exists. He’s just a man that wants to make other men and win a championship.”

Gone amid the celebration Sunday were those memories that Reid carried to training camp of the Chiefs' overtime loss to the Patriots last season, when their offense never got a chance with the ball. They were blown away in the confetti that fell over his head as he raised the Lamar Hunt Trophy, named in honor of the late founder of the Chiefs franchise.

After a long and agonizing wait, the Chiefs were finally headed back to the Super Bowl.

Reid was headed back, too.