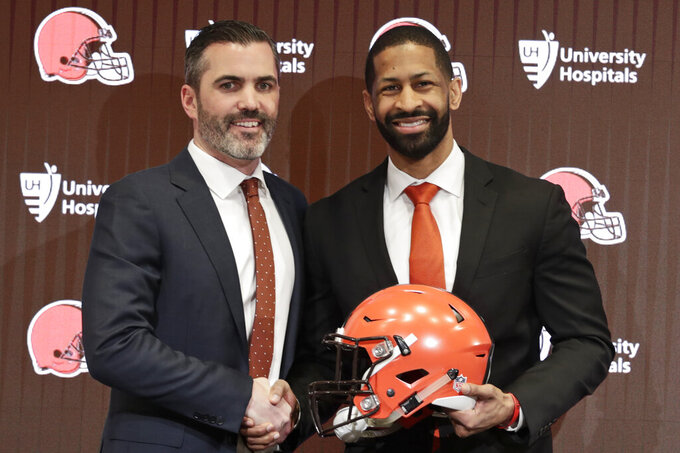 FILE - In this Feb. 5, 2020, file photo, Cleveland Browns coach Kevin Stefanski, left, and general manager Andrew Berry pose for a photo after speaking during a news conference at the NFL football team's training facility in Berea, Ohio.Cleveland's three major professional sports franchises--the Browns, Cavaliers and Indians--are teaming up to fight social injustice. One day after the NBA postponed playoff games--and other leagues followed suit--amid a player-led boycott to protest the shooting of a Black man by police in Wisconsin, the Cleveland teams announced their alliance to “develop a sustainable and direct strategy to address social injustice facing the city and all Northeast Ohio communities.” (AP Photo/Tony Dejak, File)

The move comes one day after the NBA postponed playoff games, and other leagues followed suit, amid a player-led boycott to protest the shooting of a Black man by police in Wisconsin.

Cleveland’s teams announced an alliance to “develop a sustainable and direct strategy to address social injustice facing the city and all Northeast Ohio communities.”

“This collaboration is unique in all of sports," he said. "Other cities are going to model after this.”

That's an off-shoot, and hardly the goal. The three-team union will focus on strengthening the relationships between law enforcement and citizens, promote nonpartisan voting activities and provide educational opportunities in the area.

Each team plans to use its own platforms to coordinate activities and promote “a call to action and positive outcomes.” The teams will also have some of their players involved in the alliance.

For Berry, one of only two Black GM's in the NFL and the youngest at 33, linking with the Cavs and Indians is another effort to promote change.

Berry recently launched his “Be The Solution” campaign an idea born from watching the nationwide protests following the shooting death of George Floyd by Minneapolis police and wanting to do more. He initially challenged team employees via an email to take action and join him by taking an active role — signing up for a cause, donating — and his message quickly spread.

“We understand the platform our organization has to make a positive impact on these important issues,” said Berry, who was brought back to Cleveland after a year in Philadelphia.

"When Coach Stefanski and I began discussing how we might be able to elevate and broaden that impact by expanding the dialogue to our counterparts in Cleveland, it quickly became apparent that partnering with the other teams in our city would help our region come together so we can collectively address the problems that we’ve all been working to help solve independently.”