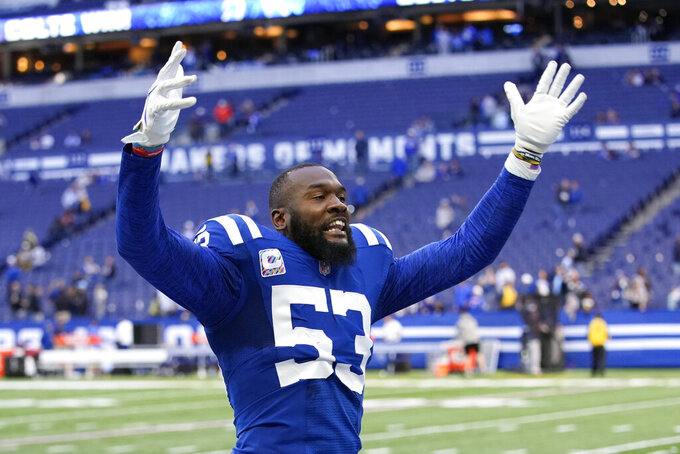 He must contend again with Derrick Henry's powerful runs and the strong stiff arm that frequently leaves defenders in the dirt. Throw in a new passing threat and the already challenging mission of stopping a two-time NFL rushing champ becomes even more difficult.

For Leonard and his Indianapolis Colts defensive teammates, this is life twice a year in the AFC South.

“I don't see him get tired," Leonard said Thursday. “You see what he does in the offseason. He's a hard worker and you respect guys like that because then when the game comes, they're prepared for these tough battles. That's why in the fourth quarter, sometimes, you see him banging his head on the goal post — he's still going."

At 6-foot-3, 247 pounds, dealing with Henry's punishing style for three grueling hours wears down even the stingiest run defenses — as Indy has learned the hard way.

Despite allowing the second-fewest 100-yard runners in the league since 2018 (five), Tennessee's workhorse back has done it four straight times in this series.

Regardless, the Colts haven't changed their goals or their techniques for taking down Henry; they're reinforcing the message.

“We’ve got to gang tackle him, knock him sideways or backwards," 2020 All-Pro defensive tackle DeForest Buckner said. “Obviously, he’s a different type of guy, different type of back and he’s a big back so we have to make an emphasis on tackling low."

The choice comes with risks.

When Indy linebacker Bobby Okereke tried to grab Henry's legs in the first meeting this season, he ended up with a face full of grass, courtesy of Henry's vaunted stiff arm.

Leonard has been a turnover machine since entering the league in 2018, and this year he has forced a fumble, recovered a fumble or intercepted a pass in six of Indy's seven games. But when he tried punching the ball out of Henry's arm last month, the former Alabama star lowered his shoulder and knocked Leonard backward.

“It was a 50-50 business decision he made — it was: do I want to punch the ball out for the team and make a big play or the other side of it is get embarrassed and run over?" Buckner said. “He took that decision to do everything he could to make a play for the team. Unfortunately, it didn’t go his way."

Denico Autry is thankful he no longer has to make those decisions. After spending the previous three years with the Colts, he signed with Tennessee in free agency during the offseason and now enjoys watching the Henry show from the sideline.

“I’m glad I don’t have to deal with him no more, but he never got me with one of those stiff arms," Autry said. “If you’re going to go, you have to go. You can’t miss on him.”

Especially when he can turn one miss into a scoring run.

Perhaps the most impressive part of Henry's resume is the workload doesn't seem to slow him down.

After topping 300 carries each of the past two seasons, he's logging 27.3 per game this year and is on pace to shatter Larry Johnson's single-season record (416 carries). Less than halfway through the first 17-game season, Henry starts this weekend needing 131 yards for a fourth straight 1,000-yard season.

At this rate, he could break Eric Dickerson's single-season record of 2,105 yards rushing and become the first player in league history to post consecutive 2,000-yard seasons.

“He’s been doing that for years — high school, college and the league," said Colts running back Jonathan Taylor, a friend whose 579 yards are second in the NFL. “He’s built for it. Some guys are special, he’s just built for it."

He's become especially proficient in the most meaningful games and has come to relish this biannual showdown, too.

When Tennessee needed to beat Indy on the road to take control of the division title chase, he had 178 yards and three TDs. When the Titans needed to protect their home field last month to get the early edge against the Colts this season, he rushed for 113 yards and caught three passes for another 31 yards.

“I just go out there and play," he said. “Just go out and finish runs, take advantage of my opportunities and try to help us win."

And this week, as the Colts desperately need a win to move within one game of the division-leading Titans, Leonard will be ready for another heavy dose of Henry.

“Just seven-plus to the ball, hamstring tackle, squeeze, wrap, roll," he said. “If it was easy, everybody in this room would play football. (Cornerback) Kenny (Moore II) is 160, 170 pounds, and he’s got a heart of a dang lion out there and he’s going to do what he has to do to get you down."