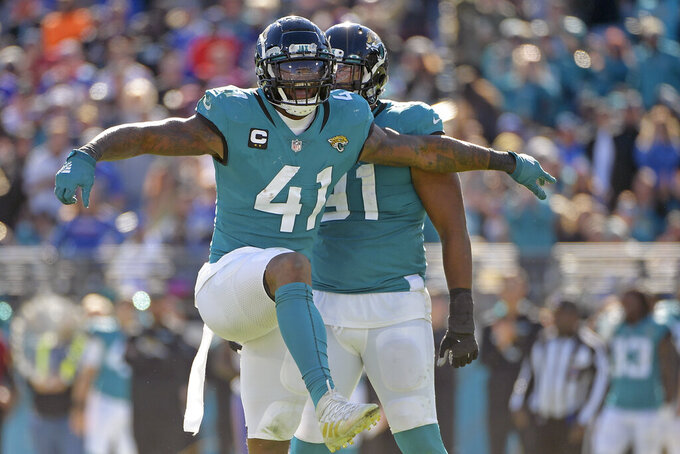 There's Josh Allen emerging as a consistent, menacing defensive playmaker. There's rookie quarterback Trevor Lawrence starting to settle into his new gig and an offense set up for balance.

The result: Jacksonville snapped a 20-game losing streak against Miami and heads to Indianapolis on Sunday with two wins in three games. It's not just Reich noticing the change, either.

“I think they have a really talented, high-energy defensive line and they like to get after it," Colts quarterback Carson Wentz said. “They fly around. They don’t do a ton, but they mix it up enough and you can tell their defensive line kind of spearheads what they do.”

At first glance, the game looks like it should be a mismatch.

The Colts (4-5) have won three of their last four, had a long weekend after blowing out the New York Jets and can put themselves firmly back in the playoff picture by reaching .500 for the first time this season.

And against a young team with an 0-3 road record and seven straight losses against division foes, the scales appear to be tipped heavily toward Indy.

The Colts know better. In 2020, Indy lost its season opener in Jacksonville — and the Jags didn't win another game.

“Everybody knows we respect this team," Reich said. “We’ve had good battles with this team in the time that we’ve been here, so a lot of respect for them coming in.”

This time, though, they have a different look with Lawrence, the top overall pick in April's draft, behind center and first-year coach Urban Meyer calling the shots.

Last weekend against Buffalo, the Jags defense gave up only two field goals against the 2020 AFC runner-up and pulled off a 9-6 victory. This week, Meyer knows, will prove every bit as challenging against some key players the coach knows well.

He won all three Big Ten matchups against Colts running back Jonathan Taylor, was on site when Indy receiver Michael Pittman Jr. caught 10 passes for 232 yards at Utah in 2019, and Meyer knows all about Wentz because of a friendship with former Philadelphia Eagles coach Doug Pederson.

So even with momentum and renewed hope, Meyer understands the type of challenge his team faces in taking its next big step.

“You can’t just sit in one (scheme), those guys will pick you apart," Meyer said. “Do I like the matchup? I wish we weren’t playing Taylor and the other guy (Nyheim Hines). That's strength against strength."

ON THE ROAD AGAIN

And this week, they visit a locale where they've lost seven of eight.

“You know it’s going to be loud,” Lawrence said. “This a game of emotions, but you can’t get emotional along the way. There’s going to be ups and downs, especially when you’re playing on the road. If they get a little momentum, they might make a few plays and they might take the lead and they might whatever. You have to keep playing."

Wentz has kept his cell phone close to him all week with his pregnant wife's due date approaching. The couple already has one daughter and a second could come at any moment, so he has been preparing to sprint into action — unless the call from Madison Wentz comes Sunday morning.

“We’re excited, we’re excited as a family," he said. “If it comes down to the game, I told my wife I’m playing and then I’ll see you at the hospital afterward. She knew that. She’s been great."

Jacksonville has the worst percentage of third-down conversions when needing 5 or more yards, just eight of 55 for 14%. What's the fix?

Two-time All-Pro linebacker Darius Leonard has perfected the NFL's equivalent of a knockout punch. Reich thinks he's the best in the league at forcing fumbles — maybe the best since Charles “Peanut” Tillman of Chicago.

The numbers illustrate how productive Leonard has been. With four forced fumbles this season, he's tied for the league lead. And since 2018, only two players — T.J. Watt (19) and Khalil Mack (14) — are ahead of Leonard (13).

“It’s like every game he has a turnover, he’s punching the ball out, that‘s what he does," 2020 All-Pro defensive tackle DeForest Buckner said.