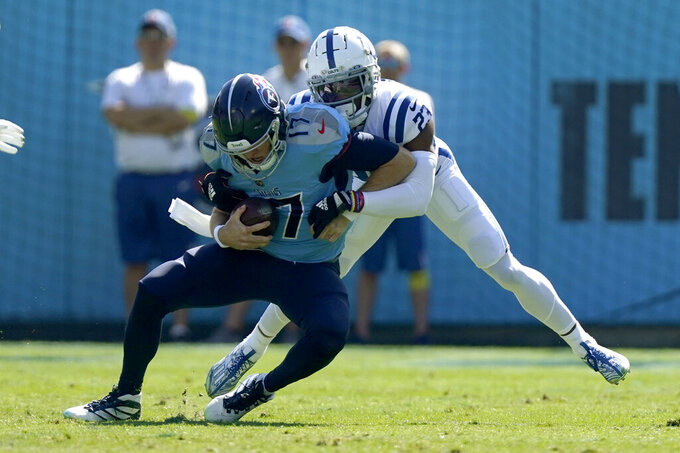 He wants the kind of attack that helped Jonathan Taylor win last season's NFL rushing title, the kind that put the Colts in playoff position and the kind that never really materialized for Matt Ryan.

Over the last two games, Ryan threw 102 passes while a nicked-up backfield logged 33 total carries, a problematic imbalance that may have led to Monday's announcement that Sam Ehlinger will replace the injured Ryan as Indy's starting quarterback.

Although Ryan suffered a separated throwing shoulder during Sunday's 19-10 loss at Tennessee, Reich said the injury is not what prompted the change and that his plan is for Ehlinger to start the rest of the season.

They believed pairing Ryan with Taylor, receiver Michael Pittman Jr. and what was expected to be a strong offensive line would provide the missing pieces for a deep postseason run.

Nothing went as expected, though.

Taylor missed two games with an injured ankle and his backup, Nyheim Hines, missed all but three plays of the same two games after entering the concussion protocol. Somehow, third-stringer Deon Jackson helped the Colts win both before leaving against Jacksonville with a quad injury.

Poor pass protection prompted Reich to make changes along the line, speed up the pace with the no-huddle offense and rely on shorter, quicker throws to keep Ryan upright.

The Colts got mixed results. They produced a season-high 34 points against the Jaguars before their dud against the Titans.

The result: Ryan's out, Ehlinger's in and everyone's hoping the former Texas star's mobility will help Indy run a more balanced attack and reverse some of the problems plaguing the Colts' offense.

Ryan was hit 59 times and sacked 24, tied with Cincinnati's Joe Burrow for an NFL high.

He threw nine interceptions and fumbled 11 times — both league highs — and only the Chargers' Justin Herbert (308) threw more passes than Ryan's 297.

Taylor remained effective at Tennessee, with 58 yards on 10 carries and seven receptions for 27 yards, but the Colts need to avoid being one-dimensional and playing catch-up.

“The core of the problem is we've got to find a way score more points,” Reich said. “Nobody can predict the future, nobody can make guarantees, I'm not going to try to do either. All I can tell you is that I've got a lot of confidence in our team, our players and our coaches."

Linebackers. Though three-time All-Pro Shaquille Leonard has played only two quarters this season, his teammates haven't stopped making plays. Zaire Franklin heads into Monday's game with a share of the league lead in tackles (73). Bobby Okereke is ninth (65).

Turnover margin. Last season, the Colts were tied for the NFL lead at plus-14, but this has been a very different year. Only New Orleans (minus-10) has a worse margin than Indy's minus-7. Three more giveaways Sunday cost the Colts a chance to win. Indy has seven takeaways.

Ryan. In 15 years, he has done just about everything other than win a championship. He won the league's MVP award in 2016, played in a Super Bowl, went to four Pro Bowls and steadily climbed the NFL's career passing charts. Now, after the first benching as a pro, the 37-year-old faces an uncertain future in Indianapolis — and possibly the end of an illustrious career.

Reich didn't say how much time Ryan would miss with the injury and it may not matter since the injury didn't prompt the switch to Ehlinger. Colts linebacker Grant Stuard suffered a pectoral injury at Tennessee. Reich has not said whether Leonard (nose surgery) or starting DE Kwity Paye (ankle) could return this week.

1-3-1 — Indy's division record with only one game left on the schedule, against Houston at home in Week 18.

With Ehlinger set to make his starting debut against Washington, Taylor's presence becomes even more vital. He's Indy's most reliable offensive weapon. Against Tennessee, he had 85 total yards on 17 touches, so it's essential to keep him involved when he's healthy. Will Ehlinger's mobility help slow down the pass rush by extending plays? Perhaps.