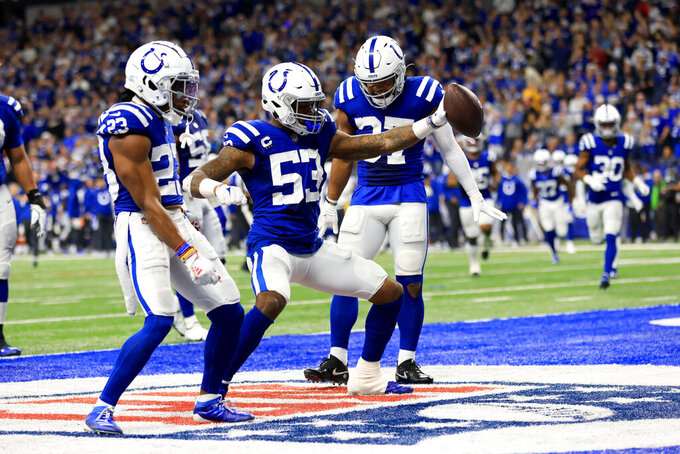 Indianapolis Colts outside linebacker Darius Leonard (53) celebrates along with teammates Kenny Moore II (23) and Khari Willis after intercepting a pass during the first half of an NFL football game against the New England Patriots Saturday, Dec. 18, 2021, in Indianapolis. (AP Photo/Aaron Doster)

Indianapolis Colts linebacker Darius Leonard couldn’t wait to get back to work Thursday.

He has even bigger plans for Sunday.

Less than three hours after team officials activated the two-time All-Pro and two other starters from the reserve/COVID-19 list, Leonard explained how difficult it was to miss Saturday’s game at Arizona — and how eager he is to face the Las Vegas Raiders this weekend.

“Actually, I tested negative that morning and then probably around 1 or 2 is when I tested positive,” he said while wearing a mask on a video call with reporters Thursday. “I got on a plane ride back home around 7 and now we’re here. I feel good."

That’s good news for the Colts, who had six starters including Leonard out because of the virus last weekend and would have been severely short-handed Sunday if the NFL hadn’t reduced the isolation period from 10 days to five.

Under the previous guideline, Leonard would have missed this week’s game, too.

Instead, all six starters who missed the Arizona game because of the virus have been activated over the past two days. It’s still unclear whether quarterback Carson Wentz or right tackle Braden Smith will clear the protocols before Sunday.

But nobody missed the game more than the passionate Leonard, who uses any slight as motivation. And now the masterful takeaway artist has even bigger plans for Sunday — clinching a playoff spot by beating the Raiders.

The Denver Broncos canceled practice Thursday as they retested five players whose results showed both positive and negative results. They held virtual meetings and planned to expand Friday’s practice to make up for the lost time on the field.

“The decision was made because we have some positives today. Some may be false positives. We’re working through that,” coach Vic Fangio said. “We’ll come out with the list here later today (with who) might be on it.

“I just felt that we needed to hit the pause button, get our hands around what we’ve got here as far as numbers and roster and we’re going to hold the meeting here this afternoon instead of practicing and the hope is tomorrow to have a good practice on Friday and Saturday and go out there and get us a W.”

After confirming infections, the Broncos placed four players on the reserve/COVID-19 list, including two starters in nickel back Bryce Callahan and right tackle Bobby Massie. The others are backup outside linebacker Stephen Weatherly and reserve cornerback/special teams ace Mike Ford.

— Browns center JC Tretter, the NFL Players Association president, was activated from the COVID-19 reserve list as Cleveland got a little healthier heading into its Monday night game at Pittsburgh.

Tretter, whose tenure as president has spanned the epidemic, missed last week’s loss at Green Bay after testing positive. He had not missed a snap since signing with the Browns in 2017 after three seasons with the Packers.

Browns rookie cornerback Greg Newsome, who had also been in concussion protocol, returned along with kicker Chase McLaughlin.

— Rams left tackle Andrew Whitworth came off the reserve/COVID-19 list, becoming the final starter to leave a list that has had at least 35 Rams over the past month.

Los Angeles’ COVID-19 problems forced the two-day postponement of their game against Seattle two weeks ago, but Whitworth’s return to practice leaves injured running back Raymond Calais as the only player on the Rams’ list.

The 40-year-old Whitworth went on the list on Christmas morning, and he missed the Rams’ 30-23 win at Minnesota. Guard David Edwards and undrafted rookie Alaric Jackson filled in for Whitworth at left tackle.

Running back Tevin Coleman and defensive back Zane Lewis, currently on IR, were added to the list. The Jets had as many as 25 players on the COVID-19 list earlier this week, plus coach Robert Saleh, who returned to the team Wednesday. New York was down to 13 on the list Thursday night.

— The New York Giants had some more movement on their COVID-19 list. Starting right tackle Nate Solder was taken off the list after a week. He is ramping up in hopes of returning Sunday against the Bears in Chicago. Matt Peart started for him last week and suffered an ACL injury. Korey Cunningham, who replaced Peart, was added to the COVID-19 list along with receiver Darius Slayton and practice squad linebacker Omari Cobb. They will join defensive linemen Dexter Lawrence and Danny Shelton and defensive back Julian Love on the COVID-19 list.

— The Minnesota Vikings have placed linebacker Nick Vigil on the reserve/Covid-19 list.

— The Cincinnati Bengals returned defensive tackle D.J. Reader and defensive end Wyatt Ray to the active roster from the reserve/COVID-19 list. Both players had been on list since Dec. 25.

— The Titans got their third starting offensive lineman back from the reserve/COVID-19 list in as many days with right guard Nate Davis activated. Rookie defensive back Caleb Farley also was removed from that list, but he remains on injured reserve.

— The Houston Texans placed wide receiver Danny Amendola on the reserve/COVID-19 list and placed defensive back A.J. Moore Jr. on the list.