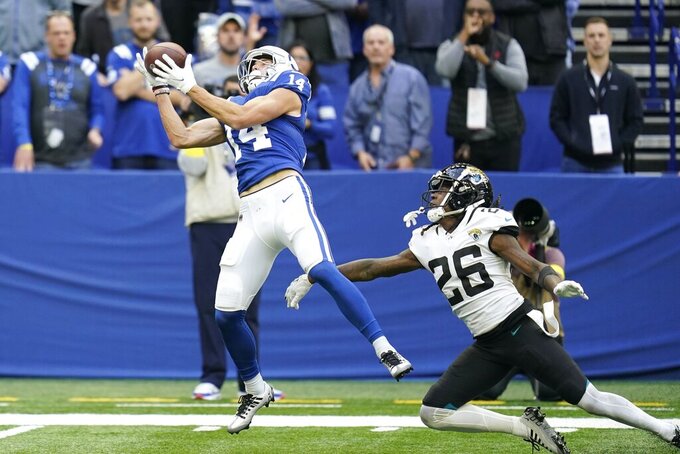 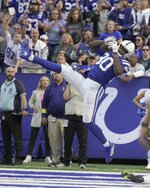 Yes, they expected it to take time for a young, mostly unproven group of receivers to grow into new roles and jell with another new quarterback.

In Week 6, the contingent finally demonstrated what it could do — together.

The combination produced Indy's best offensive game of the season, a 34-27 victory over Jacksonville.

“It definitely felt great for this offense to really come into our own, having a bunch of the young guys stepping up,” Granson said Monday. “It felt really good putting that on tape.”

Quarterback Matt Ryan wore down Jacksonville's defense with a flurry of short, quick throws that gave receivers a chance to make plays with their legs. The no-huddle strategy worked perfectly.

Ryan completed a career-high and franchise-record 42 passes for 389 yards, the last coming on a 32-yard score to Pierce with 17 seconds left.

“I thought if they came up and pressed like they did, he was going to throw the ball my way," Pierce said. “Knowing they were going to play the sticks, playing aggressive, just trying to get us out of field-goal range. ... I just saw the ball up in the air. I had a little bit of a step, at least he (Shaquill Griffin) was in panic mode, so he was chasing and wasn’t able to react.”

He wound up with three catches for 49 yards though the stats never seem to reflect Pierce's true impact. He also got Griffin twice for an additional 24 yards on pass interference calls — calls that made Griffin more hesitant at the end.

It's not just Pierce.

While Pittman remains Ryan's most consistent target, Campbell, Granson and Woods matched Pittman's 13 receptions and combined for 163 yards. And second-year running back Deon Jackson, an undrafted free agent, was a perfect 10 for 10 on balls thrown his direction for 79 yards.

Reich and Ballard believe this group can keep it up and after Sunday's confidence-building performance so does everyone else.

“That is the key thing, taking another step, trying to keep this rolling and keep that rhythm going," Woods said. “We know what we have, and we know the things we can do. We just have to put it all together and keep going.”

No-huddle offense. The quicker pace certainly gave Ryan & Co. a jolt of energy. Perhaps most important, it kept Ryan upright. While he did take some big hits, Ryan was not sacked and had no fumbles for the first time all season. Indy also finished with its highest-scoring total in 13 games.

Run defense. Maybe it's a Jacksonville thing. Indy entered the week with the league's No. 4 run defense but allowed 243 yards Sunday. It was most allowed by Indy since giving up 179 in November 2021 — to the Jags. It needs to be cleaned up quickly with Derrick Henry up next.

Jackson. He filled in nicely at Denver but made an impressive starting debut Sunday with 12 carries for 42 yards, capped by a powerful 3-yard TD run in addition to his pass-catching prowess.

Bernhard Raimann. Days after Reich said the rookie would continue playing left tackle and the Colts would live with the growing pains, Raimann left after Indy's second possession. Reich said the plan was to alternate Raimann with veteran Dennis Kelly but Kelly played so well they kept him in the game. That does not appear to be a permanent decision.

Jackson left late in the game with an injured quad, but the bigger concern is Keke Coutee. The veteran took a big shot on a punt return and remained down for several minutes, a scary enough sight that players from both teams took a knee. Eventually, he walked to the locker room and was diagnosed with a concussion. Reich doesn't expect him to play at Tennessee.

Four. The Colts ended a 110-minute, 20-second touchdown drought by scoring four touchdowns in the final 32 1/2 minutes against the Jags. Indy had six TDs in its first five games.

The victory, and the offensive performance, were promising signs. Now the Colts must prove it wasn't just a one-game fluke with a visit to division-leading Tennessee. A win in Nashville would put Indy atop the AFC South and even its division record at 2-2-1.