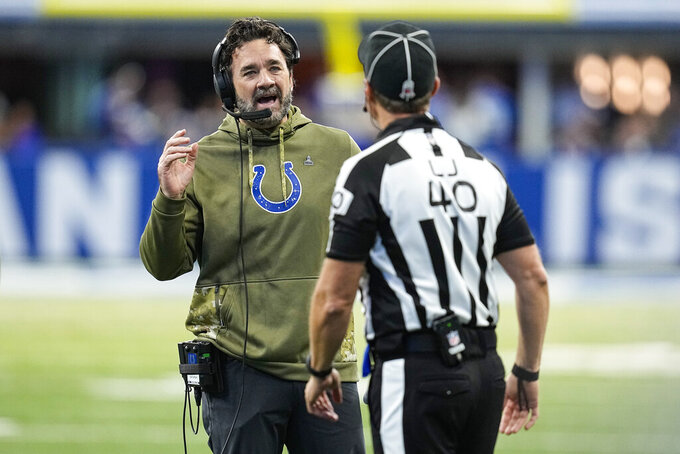 INDIANAPOLIS (AP) — The Indianpolis Colts’ inability to close out tight games has cost them two wins in four weeks.

Interim coach Jeff Saturday is looking for a simple solution.

With six games left, a bye week and two weeks of additional prep time thanks to Monday night contests, Saturday believes a fix could change the season. Indy is only 2 1/2 games back of five playoff hopefuls in the AFC.

“We have to find a way to translate what we do on the practice field to the game field, and we didn’t do that (Sunday). Finding a way to do that is vital, and we’re right there on the cusp,” Saturday said, less than 24 hours after a 17-16 loss to the Philadelphia Eagles.

The two-time All-Pro teamed up with Hall of Famers Peyton Manning, Marvin Harrison and Edgerrin James to capture 115 regular season wins and a Super Bowl ring during the first decade of the new millennium, even occasionally moving from center to guard when needed.

But in their last two home games, the Colts (4-6-1) let leads slip away when Washington and Philadelphia scored touchdowns in the final 90 seconds and Indy's offense failed to move into position for a go-ahead field goal on subsequent possessions. Both times, they lost 17-16.

While Saturday has no qualms with how the defense has played, he knows the offense and special teams must do more — late in games and throughout the first 3 1/2 quarters.

“It's knowing what your core plays are and executing them,” Saturday said. “There are plays to be made and you have to make them. They're not complicated and they’re there to be made, but you have to be consistent in making those plays. That’s how you diminish the moment because you make them time and time again. We've just got to go make it happen.”

Or continue to suffer the consequences — more frustrating one-possession losses and another offseason of watching the playoffs.

Scoring defense. Despite being on the field, at times for long stretches, the Colts defense has held up well. Only two of 11 opponents have topped the 24-point mark.

Deep passing game. While Matt Ryan played solid Sunday, completing 22 of 32 with 213 yards and again no turnovers, the deficiencies along the offensive line have forced the Colts to rely heavily on short, quick throws. The result: Indy's receivers averaged 9.3 yards per catch and Ryan averaged 6.7 yards per pass.

Jonathan Taylor. The 2021 NFL rushing champion came up 16 yards short of his second straight 100-yard game and worked hard to even get close with 22 carries. But the fact Indy stuck with the run and Taylor has scored in consecutive games for the first time all season seems to be a promising sign.

LT Bernhard Raimann and RG Will Fries. Raimann, a rookie, and Fries, a second-year player, have plugged holes along an offensive line that has struggled most of this season. The primary problem against the Eagles was penalties. Saturday acknowledged both will make mistakes and the Colts are willing to live with those miscues as Raimann and Fries progress.

DE Kwity Paye (ankle) missed the game and OL Matt Pryor, the opening-day starter at left tackle, was a late scratch after team doctors sent him to the hospital with an illness. Pryor made starts this season at LT, RT and RG before he was yanked from the lineup. Saturday isn't sure if Pryor will recover in time for Monday's game against Pittsburgh. CB Isaiah Rodgers Sr. left Sunday's game with a head injury but returned to action, and Saturday does not believe Rodgers' status will be in jeopardy this week.

43.3 — The Colts are one of the league's lowest scoring teams at 15.7 points per game and the reason can be traced almost exclusively to their season-long inefficiency inside opponents' 20-yard line. Indy is converting only 43.3% of its red-zone trips into touchdowns.

Indy has extra time this Thanksgiving Week to prepare for its first home Monday night game since September 2015. The last time the Colts appeared in prime time, they survived one of this season's ugliest games to prevail 12-9 at Denver in overtime. This week, the Colts want to show everyone this offense is much better than what people watched on that dismal October night.