Commanders have plan to ramp up receiver Curtis Samuel 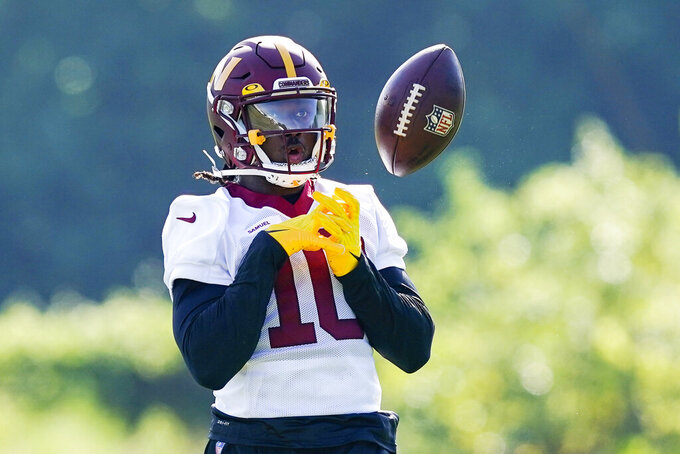 FILE - Washington Commanders wide receiver Curtis Samuel (10) misses a catch during practice at the team's NFL football training facility, on July 27, 2022 in Ashburn, Va. Coach Ron Rivera says the Commanders have a plan to ramp up Curtis Samuel because of some concern about the wide receiver's conditioning level. (AP Photo/Alex Brandon, File)

ASHBURN, Va. (AP) — Ron Rivera said the Washington Commanders plan to ramp up Curtis Samuel because of some questions about the wide receiver’s conditioning level in the aftermath of a lost 2021 season because of a groin injury.

Samuel is not dealing with the same injury but, according to the veteran coach, reported hamstring and back tightness to head athletic trainer Al Bellamy after the first couple of practices of training camp. Samuel, who turns 26 on Aug. 11, did not participate in individual or team drills and instead worked off to the side Monday.

“This is all about the plan,” Rivera said. “He and Al talked a little bit, and there was concern as far as just his overall football conditioning and shape. You can train all you want, you can condition all you want, but coming back and doing some of the things that we want him to do, we’ve got to be smart with it. Al and his guys have a plan, and so with Curtis, we’re going to stick to the plan.”

The groin injury limited Samuel to six catches in five games last season after signing a $34.5 million, three-year contract with Washington. Last week he said he felt good and fast despite not being a full participant in practice

“I just listen to coaches’ plan and what they got going for me,” Samuel said Friday. “My main thing is just stay ready whenever. I don’t really pay too much attention to all that. You know what I’m saying? We got a plan that we going to stick to it, and it’s going to work.”

Samuel was initially signed to give Washington’s offense a speed threat to go alongside top receiver Terry McLaurin. Going through offseason workouts made it seem as if injury woes were behind him.

“I’m flying around out there and I’m able to do stuff that I used to do, so I’m excited about that,” Samuel said.

With a little under six weeks until the season opener against Jacksonville, there’s not yet reason for alarm about Samuel’s availability, and the Commanders would like to keep it that way.

“We wanted to make sure we brought him back the right way,” Rivera said. “You’ll see there will be ramp-ups, and then we’ll slow him back down. There will be times where he’s interacting, getting some of the 11-on-11 work, stuff like that, but it’s all part of the plan. The ultimate goal is really the regular season more than it is anything else.”

Samuel is going into his sixth NFL season. He has 191 catches for 2,114 yards and 14 touchdowns in 58 games with Carolina and Washington.

KERRIGAN GETS TASTE OF COACHING

Two days after returning to his old practice facility to announce his retirement, Washington career sacks leader Ryan Kerrigan was back in something of a coaching capacity. Kerrigan expressed interest in going into coaching, and now he’s getting an opportunity to see what he thinks by working with Commanders defensive ends.

“He wanted to get a feel for it,” Rivera said, adding Kerrigan does not yet have an official title. “We’re going to give him a couple of weeks and then we’ll reassess and re-evaluate and see where he is.”