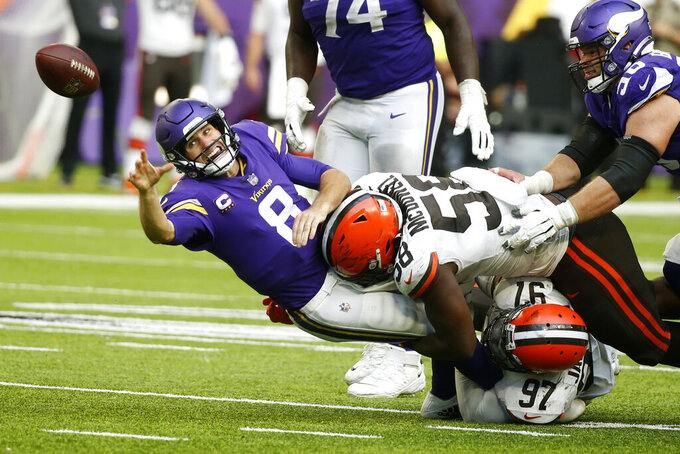 MINNEAPOLIS (AP) — Needing one big play downfield to stall the Cleveland pass rush and potentially come back to steal a win against the Browns, Minnesota Vikings quarterback Kirk Cousins lofted a deep pass to Adam Thielen in the fourth quarter.

The pass was off the mark. Thielen tried to play cornerback Greedy Williams as much as the ball. Williams came down with the interception, the first thrown by Cousins this season and snapping a streak of 224 consecutive attempts without a pick.

Cousins and the Vikings had to turn away from their short, quick passing game in an attempt to get anything going against Cleveland’s stout defense in a 14-7 loss on Sunday.

“Didn’t put enough points on the board,” Cousins said. “Started fast, had a great first drive but then didn’t do enough the rest of the game. Disappointing when we’re at home to not do more. We have to learn from it, watch the film and be very critical and correct things. Then we’ll move forward.”

Minnesota was coming off its first win of the season, but the offense had put the team in a position for more potential victories. The Vikings entered Sunday fourth in the league in total yards per game.

It looked like Sunday might be a repeat after Minnesota drove 75 yards in 14 plays and scored on Cousins’ pass to Justin Jefferson.

The Vikings totaled 175 yards the rest of the game.

“All I can say is that we just didn’t execute the way we wanted to,” Jefferson said. “The plays were called and we just didn’t get downfield and make those big plays.”

After two weeks of having a clean pocket and finding open receivers, Cousins dealt with immediate pressure from Myles Garrett and the Browns’ pass rush. He was sacked twice and didn't have the time to survey the field he had in the previous two games.

On one play, Minnesota tried to have tight end Tyler Conklin block Garrett one-on-one. Cousins found Jefferson for a 37-yard completion, but Conklin was called for holding. In the fourth, Cousins missed an open receiver after Garrett pressured by bulling straight through left tackle Rashod Hill.

“We moved the ball really well that first drive, went right down the field and scored,” Vikings coach Mike Zimmer said. “The second part of it, they started pressuring a little bit more."

Dalvin Cook left the game temporarily with an aggravation of his ankle injury and finished with nine carries for 34 yards. Alexander Mattison was held to 20 yards on 10 tries. With no success running the ball on early downs, Garrett and company came after Cousins on third down.

“I still believe offensively we can look like we did a week ago, and two weeks ago, as well,” Zimmer said. “Like I told the team, I’ve been doing this 27 years, I know good teams and I know bad teams. I know this team has a chance to be pretty darn good."