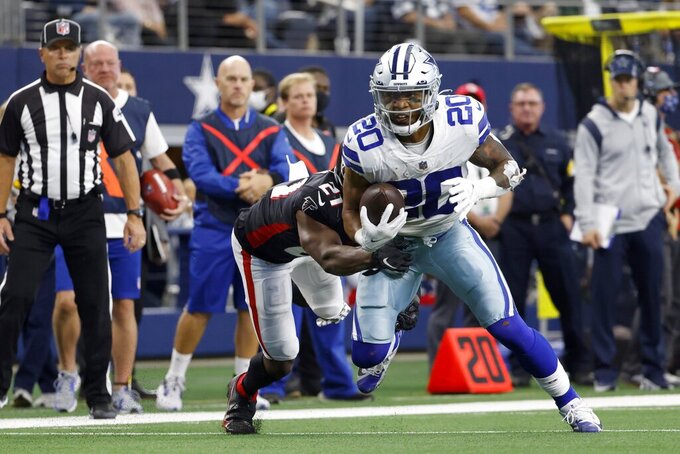 Dallas Cowboys running back Tony Pollard (20) is stopped after catching a pass by Atlanta Falcons safety Duron Harmon (21) in the second half of an NFL football game in Arlington, Texas, Sunday, Nov. 14, 2021. (AP Photo/Ron Jenkins)

BETTING LINE: Chiefs by 2 1/2, according to FanDuel SportsBook

TURNOVER DIFFERENTIAL: Cowboys plus-5; Chiefs minus-8.

COWBOYS PLAYER TO WATCH: CB Jourdan Lewis is coming off his best game of the season against Atlanta, when he often drew the assignment of rookie tight end Kyle Pitts. He could have a similar role against the Chiefs' Travis Kelce on Sunday.

CHIEFS PLAYER TO WATCH: WR Tyreek Hill is coming off a two-touchdown performance against the Raiders. It was his 12th game with multiple TDs since 2017, making him the 10th player in the Super Bowl era with that many through 84 career games.

KEY MATCHUP: Cowboys QB Dak Prescott against Chiefs QB Patrick Mahomes. Sure, they won't actually face each other, but whichever quarterback has the better game probably means his team wins. Prescott has a career-best six-game run with multiple TD passes, the longest active streak in the NFL, while Mahomes threw for 406 yards and five TDs last week against Las Vegas.

KEY INJURIES: Cowboys LT Tyron Smith could return after missing two games with a sprained ankle. DE DeMarcus Lawrence, out since the opener with a broken foot, is doing rehab work in practice but appears to be at least another week from returning. ... Chiefs RT Mike Remmers (knee) could return this week. So could RB Clyde Edwards-Helaire (ankle), who has not played since Week 5, though it's possible the Chiefs hold off on him until after their bye.

SERIES NOTES: The Cowboys have a 7-4 advantage in the seldom-played series, and they have won three of the past four meetings. The teams play for the Preston Rd. Traveling Trophy, named for the street on which the late-Chiefs founder Lamar Hunt and Cowboys owner Jerry Jones once lived. Jones currently has possession of the wooden trophy.

STATS AND STUFF: The Cowboys lead the NFL in total yards per game (433.9) and points (31.6). The last time they finished the season leading both categories was 1971, when Dallas won its first Super Bowl title. ... Prescott leads the league with a 110.8 passer rating, the highest through nine games for the Cowboys. ... CB Trevon Diggs has an NFL-best eight interceptions and is the first Dallas player with at least that many in a season since Everson Walls finished with nine in 1985. ... Cowboys LB Micah Parsons leads NFL rookies with six sacks and is two shy of DeMarcus Ware’s 2005 club rookie record of eight. ... Cowboys FS Jayron Kearse had 55 tackles, just one from his career high with Detroit last season. ... Dallas K Greg Zuerlein needs one field goal for 250 in his career. At 144 games, he would be the third fastest to that mark behind Justin Tucker (118) and Stephen Gostkowski (139). ... The Chiefs are 3-0 against the NFC East this season. ... The Chiefs are in first place in the AFC West as they seek their club-record sixth straight division title. ... Coach Andy Reid needs three wins to join Marty Schottenheimer (101) and Hank Stram (124) as the only coaches in Chiefs history with 100 regular-season wins. ... Mahomes needs 816 yards passing to pass Bill Kenney (17,277) for fourth-most passing yards in franchise history. ... Mahomes is 11-2 against the NFC. ... Mahomes threw for 406 yards and five TDs last week at Las Vegas. It was his third career game of at least 400 yards and five touchdowns since 2017; the rest of the league combined has four such games. ... Kelce has caught a pass in 121 straight game, the fourth-longest active streak in the NFL. ... Chiefs WR Tyreek Hill needs one TD catch to pass Chris Burford (55) for third most in franchise history. Two TDs would tie Otis Taylor for second. ... Kansas City RB Darrel Williams became the first running back in club history with at least nine catches, 100 yards receiving and a touchdown last week against Las Vegas. ... Kansas City held the Raiders to 1 of 9 on third downs last week, allowing a net of minus-3 yards on those plays.

FANTASY TIP: Keep an eye on the inactive list Sunday. If the Chiefs have Edwards-Helaire active, it would greatly eat into the touches for Williams, who has become a fantasy star in his absence. Williams ran 11 times for 43 yards and caught nine passes for 101 yards and a score against the Raiders last week.