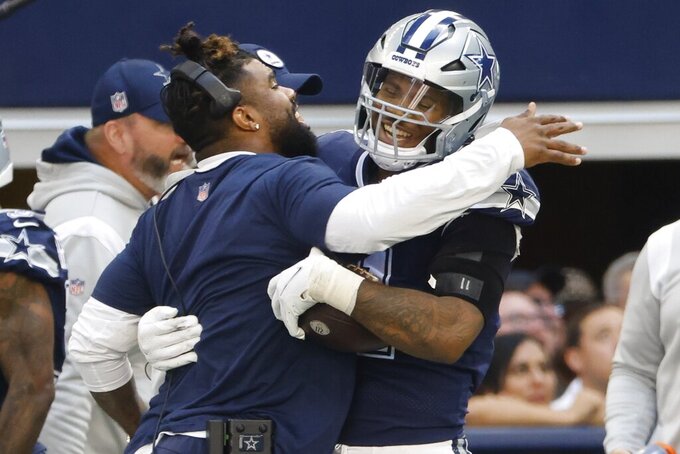 Dallas Cowboys' Ezekiel Elliott congratulates Micah Parsons after his touchdown run following his fumble recovery during the second half of an NFL football game against the Chicago Bears Sunday, Oct. 30, 2022, in Arlington, Texas. (AP Photo/Michael Ainsworth)

This is the first time Elliott has missed consecutive games because of an injury, though he did serve a six-game suspension over domestic violence allegations in 2017. Elliott had been listed as questionable on Friday’s injury report.

Elliott’s absence likely means a greater workload for Tony Pollard, who has responded well to this opportunity so far.

Pollard rushed for 131 yards and three touchdowns on 14 carries when Elliott was sidelined for the Cowboys’ 49-29 victory over the Chicago Bears on Oct. 30. The Cowboys (6-2) haven’t played since.

Elliott has rushed for 443 yards in seven games this season. The three-time Pro Bowler is averaging 4.1 yards per carry.

Green Bay will have offensive tackle David Bakhtiari (knee) and wide receiver Amari Rodgers (hamstring) available after both players were listed as questionable.

Campbell, Doubs and Jean-Charles already had been ruled out on Friday. The Packers also have placed outside linebacker Rashan Gary (knee) and cornerback Eric Stokes (knee/ankle) on injured reserve since their 15-9 loss at Detroit last week.

The Packers are trying to snap their first five-game skid since 2008, which was Aaron Rodgers’ first season as Green Bay’s starting quarterback. Green Bay hasn’t dropped six consecutive games within the same season since 1988.