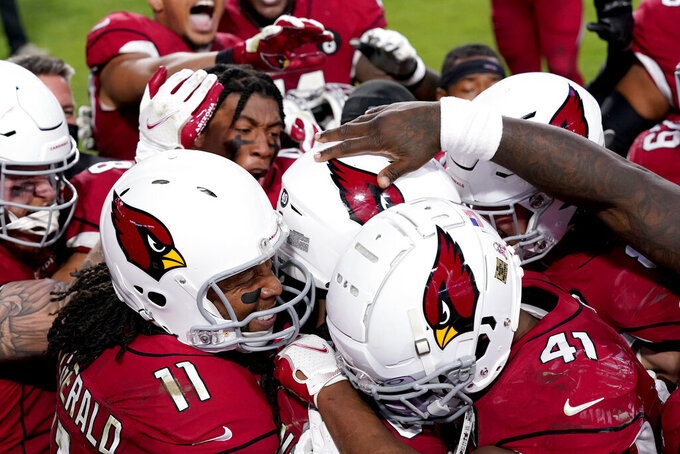 The Arizona Cardinals celebrate after their game winning touchdown against the Buffalo Bills during the second half of an NFL football game, Sunday, Nov. 15, 2020, in Glendale, Ariz. The Cardinals won 32-20. (AP Photo/Ross D. Franklin)

GLENDALE, Ariz. (AP) — D.J. Humphries' stunned expression — mouth hanging open and arms in the air while slowly walking around the field — said it all as Arizona's left tackle tried to process what he just saw.

But here's the deal about DeAndre Hopkins' miraculous catch over three defenders on a throw from Kyler Murray with 2 seconds left that lifted the Cardinals to a 32-30 win over the Buffalo Bills on Sunday: It was a planned play.

The Hail Mary, or in this case the “Hail Murray," is certainly a low-percentage, desperation play. But this version is one the Cardinals had been practicing for nearly two years since coach Kliff Kingsbury arrived in the desert. It didn't go exactly to script, but the gist was what the Cardinals wanted.

“That's the only time I've ever seen it not be luck,” Humphries said on Monday. "(Hopkins) went up and took that ball out of the air, grabbed it, brought it down and scored that touchdown. It wasn't falling and then cradling the ball, it wasn't a he-tipped-it-and-I-caught-it.'

“It was 'These three guys are around me, I want the ball more, and I'm going to go get it.'”

Here's a breakdown of how the play developed from players and coaches:

It started with Murray rolling to his left, which was the plan, even though the right-hander had to throw across his body. The problem was that Humphries slipped and fell while blocking and it allowed Buffalo's Mario Addison a clear lane to tackle the quarterback.

This is where Murray's elite speed and shifty style paid off. He did a quick stutter step, which caused Addison to fly by, and Murray had bought himself another second or two to look downfield.

“I fell in the middle of the play; I fall and I lose the edge,” Humphries said. “So I'm thinking, ‘Oh, he’s going to get him' and ‘Oh my god, I'm going to give up a sack' to ‘Oh, I forced (Murray to throw) an interception' to ‘Oh my goodness, it’s a touchdown, we just won!

“There were a lot of emotions within like three seconds of each other.”

After making Addison miss, Murray continued sprinting toward the left sideline. Kingsbury said Hopkins wasn't the first option on the play: There were a few receivers dragging across the field in front of the end zone, including deep-play threat Andy Isabella.

“But we saw Hop over there and basically said, ‘Hey, if you like the look on Hop, take that shot,’” Kingsbury said.

So Murray did. While falling backward and out of bounds, the 5-foot-10 quarterback heaved the 43-yard pass toward the end zone. He said that when the ball left his hand, he knew it had a chance because of the trajectory and distance.

By now, the pictures of the catch are ubiquitous on the internet. Hopkins is surrounded by three Buffalo defenders, who all looked like they were in position to knock the ball away. But the receiver got two hands on the ball in the middle of the mass of bodies and came down with the stunning catch.

That's the part of the play that can't be scripted. It's just an All-Pro athlete making an All-Pro play.

“In basketball terminology, it's like someone getting dunked on,” Hopkins said with a grin. “It was on three people. They were in position. It was just a better catch by I.”

That's about the time the camera found Humphries, who was walking around in disbelief. He said teammates had to remind him that there were still 2 seconds left and he had to go back on the field.

Humphries said he doesn't mind that gif version of him with the wide eyes will probably be circulating on the internet for a long, long time. After all, the Cardinals have a 6-3 record, are tied for first in the NFC West, and life is pretty good."

“That's a positive one,” Humphries said. “I was making that face with a win. So I like that being the gif.”