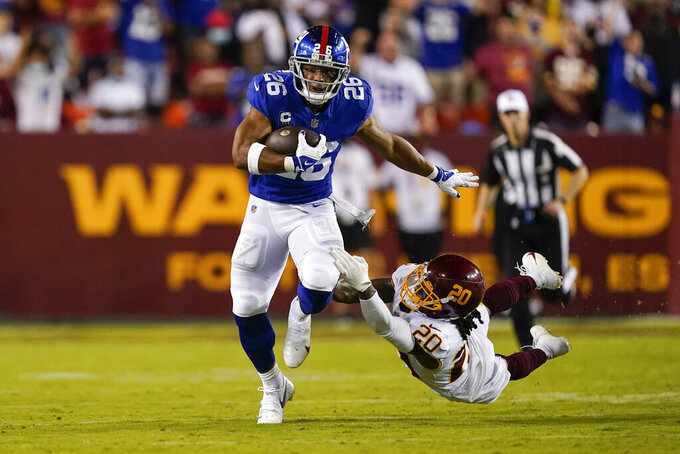 FILE - New York Giants running back Saquon Barkley (26) breaks away from Washington Football Team cornerback Bobby McCain (20) as he runs with the ball during the first half of an NFL football game, Thursday, Sept. 16, 2021, in Landover, Md. New coach Brian Daboll needs to fix the offense and get quarterback Daniel Jones and running back Saquon Barkley going. (AP Photo/Alex Brandon, File)

LAST SEASON: The Giants have had five consecutive losing seasons during which they have gone through three coaches, an interim coach and two general managers. A four-win season led to the firing of second-year coach Joe Judge and veteran general manager Dave Gettleman. Injuries played a big part in the 2021 debacle. A weak offensive line was decimated early with the losses of C Nick Gates (broken leg) and LG Shane Lemieux (knee), while the defense lost inside linebacker and leading tackler Blake Martinez. Overall, the offense was bad and coordinator Jason Garrett was fired in November. QB Daniel Jones was inconsistent and missed the final six games with a neck injury. With little daylight to run, RB Saquon Barkley struggled coming off an ACL injury. Neither top draft pick Kadarius Toney nor major signee and fellow WR Kenny Golladay caught a TD. The defense played surprising well at times, with rookie LB Azeez Ojulari getting a team-high eight sacks and S Xavier McKinney leading with five interceptions. Co-owners John Mara and Steve Tisch have gone to the Buffalo formula for '22, hiring Bills assistant general manager Joe Schoen and offensive coordinator Brian Daboll to turn things around.

CAMP NEEDS: Daboll has to find a way to get the offense in gear. It means finding five linemen who can work together, give Jones time to throw and open holes for Barkley. New defensive coordinator Wink Martindale has promised an aggressive, unpredictable unit. There are health issues on both sides. WR Sterling Shepard (Achilles), Martinez (knee) and Gates (leg) are iffy heading into camp, as well as the talented Toney, who missed too much time with a assortment of injuries.

KEY CAMP COMPETITIONS: The O-line, tight end, the cornerback opposite Adoree Jackson. Maybe the quarterback job should be watched. Jones, who has yet to live up to being the No. 6 overall pick in 2019, is the starter at quarterback heading into camp. Veteran Tyrod Taylor may push him. The line seems to have bookend tackles in Andrew Thomas and Neal. Feliciano was signed to play center and Glowinski played well at right guard in Indianapolis. Lemieux, second-round draft pick Joshua Ezeudu, Max Garcia, who had 11 starts with the Cardinals last season, will compete at LG. Second-year pro Aaron Robinson will get a chance to replace Bradberry with Rodarius Williams and rookie Cor'Dale Flott in the wings. Daniel Bellinger and Seals-Jones are top picks to replace Engram at tight end.

EXPECTATIONS: Teams with new coaches and general managers usually get a first-year bump with players being a little more motivated. That said, the only new coach to get the team to the postseason since the Giants won the Super Bowl in February 2012 was Ben McAdoo in ‘16. Judge came close in ’20, his first year and the pandemic season. New York has talent on defense with Leonard Williams, Ojulari and Thibodeaux. The key is the offense. If the line works, Golladay returns to form, Toney and rookie Wan'Dale Robinson bring a speed element at the wide out spots and Jones and Barkley bounce back, There's an outside chance. The odds certainly are against them.