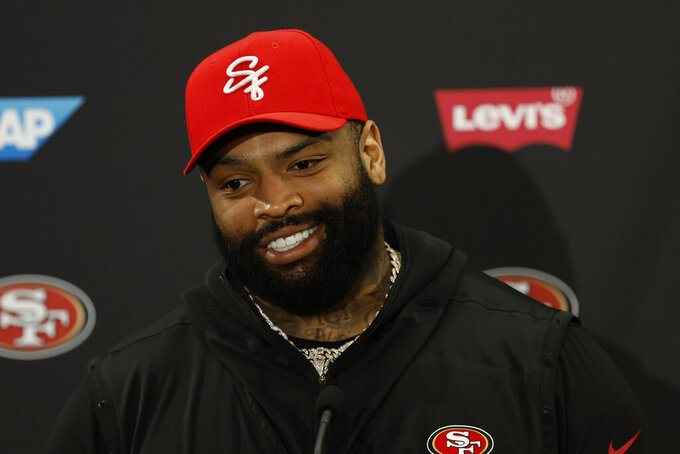 EAGAN, Minn. (AP) — Christian Darrisaw walked off the Vikings practice field this week and immediately went to the weight room to ride an exercise bike.

For the big, second-year left tackle, it’s a tactic to help his cardio endurance and to recover from the day’s practice.

That he’s adding in extra work in August is a blessing for the 2021 first-round draft pick.

Darrisaw’s first NFL season was hampered by injury, first to a core muscle that twice led to surgeries between his final college snap and his Minnesota debut. Later, he missed two games with an ankle injury.

After a healthy offseason, Darrisaw is ready to meet the expectations that came with being the No. 23 overall pick out of Virginia Tech last year and the long-sought anchor at left tackle on the Vikings line.

“One hundred percent, night and day, just having a full offseason, able to get out here and get the live work against the whole of the defensive line,” Darrisaw said of the differences in his second season.

Growing up in Maryland, Darrisaw became a fan of Trent Williams, who was a Pro Bowl left tackle with Washington. Mutual acquaintances introduced the two this year and they met in person when the San Francisco 49ers were in town last week for joint practices.

’That’s why I wear 71,” Darrisaw said. “It’s just like everyone knew he was my favorite player and like, ‘you need to get in contact with him.’ I get little things from him. Like, he watched the film from the first joint practice and some of the things I can correct, just like little bad habits I can break.”

After practices, Williams would talk with Darrisaw and discuss techniques and tips for improvement.

“I do see a lot of myself in him, especially the young Trent,” Williams said. “That’s how a lot of our conversations are, me just helping him morph into a more consistent professional. He took a huge leap from Year 1 to Year 2. And then just the little things.”

The little things, Darrisaw says, include being tough on himself. Williams and Darrisaw are similar sized (the younger comes in at 6-foot-5 and 315 pounds). But the ability to dominate physically can lead to bad habits.

“When I’m watching myself on film, be hard on myself because there may be some times I may get the job done and against a different pass rusher like a Nick Bosa, you can’t do that type of stuff because he’ll expose that,” Darrisaw said. “Even if the set's not good and I won my rep, like, correct it. Even though I won, still be hard on myself. The little things really matter.”

Williams is a nine-time Pro Bowl left tackle, who was a first-team All-Pro last year in his second season with San Francisco.

Over an 11-year career, he’s learned what it takes to elevate his game and Williams is hoping he can help Darrisaw avoid some of the same mistakes.

“He’s such an athlete that he overlooks the technical part of the game because he can just wake up and win,” Williams said. “That’s how I got through college. That’s how I got through my first three or four years in the NFL. I still have bad habits going back to that. That’s all I’m working on him about, just letting him know what’s to come, what changes to make and what can help him in the future.”

The core muscle surgeries pushed back Darrisaw’s Minnesota debut. After missing training camp, he was inactive for the first three games. He made his offensive line debut in Week 5 and started a week later. He ended up starting 10 games.

With a full offseason and training camp, Darrisaw is making an impression on Minnesota’s new coaching staff, who see the physical talent with a mind to match.

“He’s not one of those guys that needs to be told every little thing, every little adjustment,” Vikings coach Kevin O’Connell said earlier in training camp. “He naturally sometimes just does things based upon the right play — the smart way to hit a block, how to pass off a stunt — just understanding how we want to execute in the screen game, the play pass game. I couldn’t be more excited about where he’s at right now.”

Being healthy is a good start.