Equipping teams during a pandemic a unique challenge 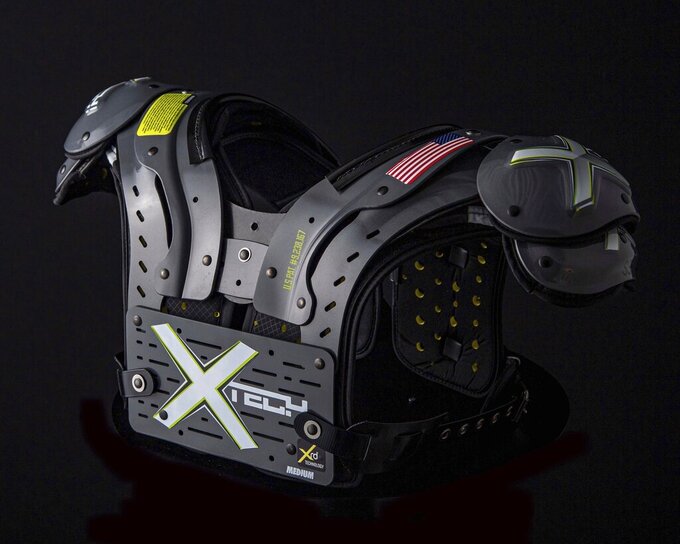 In this undated photo provided by XTECH, XTECH custom shoulder pads are displayed. XTECH co-founders Broderick and Monica have found ways to get shoulder pads out to NFL, college and high school players in the midst of the coronavirus pandemic. (William Hauser Photography/XTECH via AP)

As football teams from the NFL to the high school level prepare — and hope — for a 2020 season, one of the unrecognized concerns by outsiders could be getting those squads fully equipped.

Just like those teams, XTECH, which makes custom shoulder pads out of its New Jersey factory, has had to scramble. That meant using digital means to design the pads without actually meeting up with players to get their measurements and preferences.

“The nice thing on our level is everything has become a mapping system, helmets and pads,” says Marquez, who also oversees a website focusing on helmet fits.

"It is just becoming a little bit easier digitally, and you're also looking at travel time for these guys from the equipment companies going around to fit players. If we can get it done on a database with XTECH, it is definitely a big benefit for us.

“For example, we don’t know a freshman right now other than from a recruiting trip. But now through the technology we can actually look at a pad and say this is what this athlete might best step into. Everything is very customized for that athlete before he gets here, which is really time saving for us in an uncertain time.”

In a normal offseason, XTECH staffers would travel the nation fitting customers; the company supplies players on every NFL team, more than 500 colleges and 1,000 high school programs.

There also would be a huge push to recondition shoulder pads, which could be particularly problematic because of the volume of equipment involved.

“We heard about a lot of disruption in the supply chain, especially on the reconditioning front or when there is any sort of manufacturing done abroad,” says Bob Broderick, XTECH's co-founder. “All of our pads and reconditioning process are done in the U.S. We made a promise to whether it was an NFL team or a high school that buys from us, your reconditioning is going to be done and on the way back, or your new orders will be there. I heard the panic in coaches' voices and equipment directors' voices: Will we be able to get our stuff back and our new things in? The answer is yes.”

How? That answer is in digitalization and U.S. manufacturing.

Since 2013, XTECH has been personally fitting players using such data as age, level and style of play, height, weight, measurements, position, injury history and accessory preferences.

Broderick and his staff have been nearly everywhere in the country doing so, and co-founder Teddy Monica then designs the pads off such info. Those trips became impossible during the pandemic, so Broderick and Monica adjusted.

“This is not like buying a size 12 sneaker or a large pad,” Broderick explains. “This is a several hundred dollar purchase and they want to know what they are doing. We have them fill out a questionnaire which provides digital sizing help. It generates data that we can compare with similar players from our database to best suggest a customized pad.”

NFL players have been receiving mock-ups and samples at home, then XTECH staffers FaceTime with them to gauge preferences. The player sends the “demo” pads back to XTECH for custom building from scratch.

“If it's a high school player," Broderick explains, "we will then call the parent and discuss the player and his history, and say, 'this is what we recommend.' Within 12 hours the order is placed online, giving them some confidence they will get the item on time.”

Two years ago, Kevin was looking for a product to protect his sons and reached out to XTECH after noticing some NFL players wearing the pads.

“Gavin would say in the past he would take hits and really feel it, and now he was telling me, 'I don’t feel anything in these pads,'” Kevin Sawchuk says.

Now, they both wear the pads, and the Sawchuks have gotten quick responses to their needs during the pandemic so that each son is ready if the season is played.

As NFL teams have gone almost totally digital in their offseason, they've dealt with a variety of issues involving players. Those include, naturally, getting them the proper equipment.

Seven long snappers have had custom-built pads made and shipped directly to their homes in the past two months despite never meeting up with the manufacturers.

“This year is kind of unique, we're not able to see our incoming guys,” says the Rams' Burger. "XTECH developed a database digitally which is based on the position of a player, the size of the person, the style of play, and they can narrow it down to exactly the right fit. I have full confidence in them that if they have enough of the data, they can make anything.

“So I got with them and had a set of pads made based on the data from their questionnaire for a player. And we had some guys from colleges who wore the pads, like (linebacker) Terrell Lewis from Alabama, and (receiver) Van Jefferson from Florida.”

“The data is a tremendous help to us now,” Burger adds. "By the time we see these rookies, to get them a custom pad would be a really tight turnaround.

“But it's already done.”