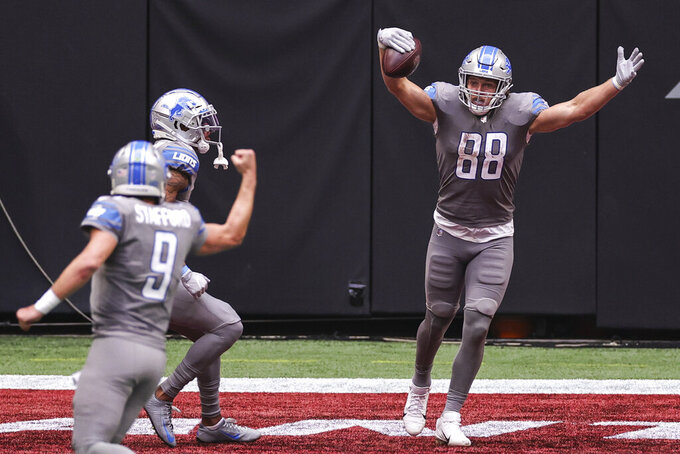 Detroit Lions tight end T.J. Hockenson (88) celebrates a touchdown in an NFL game against the Atlanta Falcons, Sunday, Oct. 25, 2020 in Atlanta. The Lions defeated the Falcons 23-22.(Margaret Bowles via AP)

Beginning with Thursday’s Packers-49ers matchup and ending with Monday’s Patriots-Jets game, there are opportunities for fantasy owners to take advantage of in Week 9.

The week also signals the expected return of Panthers RB Christian McCaffrey, the consensus first overall pick in fantasy leagues, who has been sidelined since suffering a high ankle sprain in Week 2.

This looks like a good week to play Steelers personnel, as Ben Roethlisberger gets a strong matchup against the Cowboys defense. Week 9 also shapes up well for other quarterbacks such as Josh Allen (Bills), Justin Herbert (Chargers) and even Nick Foles (Bears).

START: Ben Roethlisberger, QB, Steelers: Fantasy owners of Big Ben are salivating at the prospects of Roethlisberger facing a Dallas defense ranked 28th in yards per catch allowed (11.9) and tied for third with 17 touchdown passes allowed. This should mean a big game for Roethlisberger, who has thrown at least two TDs in all but one game thus far in 2020.

SIT: Lamar Jackson, QB, Ravens: Yes, it is wise to bench Jackson, especially if there’s another option (Denver’s Drew Lock is a good streamer vs. the Falcons). Jackson has not exceeded 210 passing yards and at least 20 completions since Week 1 and faces a tough Colts defensive unit that allows the fewest fantasy points per game to opposing passers. Last week’s rash of turnovers further suggests sitting him.

START: Chase Edmonds, RB, Cardinals: A PPR darling, Edmonds should get the start in place of injured Kenyan Drake (ankle). Edmonds, who averages 6.1 yards per carry, gets a very favorable matchup in the form of a Dolphins defense that is 29th in yards per carry allowed (4.9) and ranks 26th in fantasy points per game allowed to opposing running backs.

SIT: Damien Harris, RB, Patriots: Although Harris is coming off getting 102 yards and a TD in last week’s loss against the Bills, don’t be fooled into thinking he’ll have his way against the winless Jets. New York is 10th in fewest yards per carry allowed and has quietly run off a three-game streak in which it has not allowed a rushing touchdown to an opposing runner. While the Jets are suspect in defending the pass against opposing RBs, Harris won’t be the back benefiting, as Rex Burkhead and James White will get those chances.

START: Will Fuller, WR, Texans: The subject of trade rumors before Tuesday’s deadline, Fuller has a touchdown pass in each of his past five games. Houston’s passing attack has found life post-Bill O’Brien, a trend that should continue against a Jaguars defense that has allowed at least 30 points in each of the past six games.

SIT: CeeDee Lamb, WR, Cowboys: Lamb has managed only 81 receiving yards in his past three games and has not scored a touchdown since Week 4. With either Garrett Gilbert or Cooper Rush getting the start at QB against a Steelers defense that has allowed the third-fewest passing yards in the league, it’s best to keep Lamb on the fantasy bench.

START: T.J. Hockenson, TE, Lions: With WR Kenny Golladay (hip) unlikely to play, look for QB Matthew Stafford to look in the direction of Hockenson. Hockenson had season highs in both targets (10) and receptions (seven) in Week 8, and faces a Vikings defense that allows the most receiving yards per game (69.7) to opposing tight ends.

SIT: Mike Gesicki, TE, Dolphins: The change from Ryan Fitzpatrick to Tua Tagovailoa at quarterback didn’t work for Gesicki, who had just one catch. His numbers had already been trending downward as he has just one game with more than three targets since Week 3. The Cardinals, who had long been TE-friendly for fantasy purposes, have improved this season, so look for another option beyond Gesicki.

START: Stefon Diggs, WR, Bills: Diggs has been targeted at least eight times in all but two games this season. That will translate into a huge afternoon as Diggs and QB Josh Allen get to face a Seahawks secondary that allows the most fantasy points per game to opposing receivers. Seattle is also 25th in yards gained allowed per attempt, so look for Allen and his strong arm to go up top frequently in the direction of Diggs.

SIT: Ryan Tannehill, QB, Titans: Although Tannehill has fired off 17 touchdown passes, he has not thrown for more than 233 yards in three of his past four games and runs into a Bears defense that has allowed the second-fewest fantasy points per game to opposing QBs. Chicago has allowed only eight touchdown passes thus far, making it unlikely for Tannehill to produce fantasy-friendly numbers.

START: JaMycal Hasty, RB, 49ers: Don’t focus too much on Hasty having 12 carries for 29 yards at the Seahawks in Week 8. He did score a touchdown and remains the healthiest back in banged-up San Francisco’s RB group. The Packers, who face the 49ers on Thursday night, allow the most fantasy points per game to opposing backs and have struggled against pass-catching backs. That means Hasty could have a solid outing if QB Nick Mullens gets him involved early.

SIT: Todd Gurley, RB, Falcons: Since rushing for 121 yards in Week 5, Gurley has a total of just 156 yards in his past three games. While he has rushed for three touchdowns the past two weeks, Gurley could have a tough time running against a Broncos defense ranked 10th in fewest fantasy points per game to opposing running backs while also continuing to concede carries to Brian Hill.

START: Justin Herbert, QB, Chargers: The strong-armed rookie has produced at least 264 yards and three touchdown passes in each of his past four games. He’s also tossed for at least 300 yards in each of his first three home games and is a good bet to make it four in a row at the expense of a Raiders defense allowing 262 passing yards per game.

SIT: Sterling Shepard, WR, Giants: Shepard has been targeted 18 times in his first two games since returning from injury, yet while he should continue to be targeted frequently by QB Daniel Jones, his production could be stifled by Washington which has quietly emerged as the toughest defense against opposing WRs.