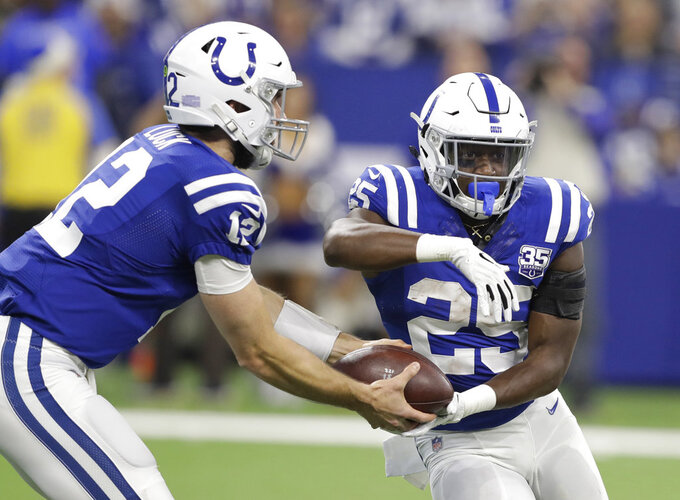 FILE - In this Dec. 23, 2018, file photo, Indianapolis Colts quarterback Andrew Luck (12) fakes a handoff to running back Marlon Mack (25) during the first half of the team's NFL football game against the New York Giants in Indianapolis. Lately, the Colts have allowed Luck to use his preferred strategy by scoring early and often then relying on a balanced attack and an increasingly stout defense to close out victories. It’s happened each of the past two weeks in crucial games, putting Indy on the cusp of a historic milestone. (AP Photo/Darron Cummings, File)

INDIANAPOLIS (AP) — Andrew Luck has done some of his most memorable work rallying the Indianapolis Colts.

Lately, the Colts' have allowed Luck to use his preferred strategy by scoring early and often before relying on a balanced attack and an increasingly stout defense to close out victories. It's happened each of the past two weeks in crucial games, putting Indy on the cusp of a historic milestone.

"I think it's discipline, sound fundamentals, sound technique, it's converting third downs. It's all of those things," Luck said Tuesday as the Colts try to become the first team to reach a conference championship game after starting 1-5. "It's nice to be playing with a lead, especially on the road."

In previous seasons, slow starts forced Luck & Co. to climb out of some huge holes.

Sure, Luck thrived in those situations, engineering 21 game-winning drives in the fourth quarter or overtime during his first five pro seasons, including a league-record seven in 2012 and the second-largest playoff comeback in January 2014 against the Kanas City Chiefs. He added three more comeback wins this season, all since late October, with the most recent coming Dec. 23 against the New York Giants.

But as the playoff picture came into focus, Luck didn't need a series of fantastic finishes.

Instead, during their current five-game winning streak, the Colts (11-6) have trailed in only two games and have not faced a deficit larger than 10. Indy led wire-to-wire in three of its last four victories and hasn't trailed since scoring the go-ahead touchdown in the final minute of the Giants' game in Week 16.

The formula could prove particularly useful at Kansas City in Saturday's divisional round game.

"When you get the lead, you can dictate how the game goes," said kicker Adam Vinatieri, who owns four Super Bowl rings and is expected to appear in his 32nd postseason game. "By taking the lead, you get to manage the game and that's one of the things I'm really impressed with is how well the defense has played the last couple of weeks."

This will be a different kind of test.

The AFC West champion Chiefs (12-4) return from a bye week as the conference's top seed, with the league's highest scoring offense (35.3 points) and a lot to prove in a lopsided postseason series.

Kansas City is 0-4 all-time against Indy in the playoffs, having lost at home following the 1995 season after securing he No. 1 seed and again in 2003, in a game that featured no punts. The Chiefs also lost in Indy following the 2006 season when Larry Johnson, the league's No. 2 rusher, gained just 32 yards, and again in January 2014 when Luck rallied the Colts from a 38-10 deficit in the third quarter for a 45-44 victory falling just short of the record 32-point comeback orchestrated by Colts coach Frank Reich in January 1993.

This time, Kansas City is back on its home turf and trying to create some new memories.

"I'll tell you that we are going through the process and getting ready to play a great football team," coach Andy Reid said. "So we know that and that's where absolutely all my energy is going."

But what the Chiefs have seen on film is the hottest team in football.

Running back Marlon Mack has five 100-yard games this season, including each of the past two weeks, receiver T.Y. Hilton and tight end Eric Ebron continue to make big plays down the field, the offensive line hasn't given up a sack in two weeks and Luck appears to be in perfect sync.

The combination has led Indy to wins in 10 of its last 11 games, with the last two coming in elimination games on the road.

But after taking a 14-0 lead in a Week 17 playoff-clinching victory at Tennessee and a 21-0 lead at Houston in last week's wild-card victory, the Titans and Texans never had a chance — and the Colts would like to keep it that way one more week.

"We're trying to score every time we touch the ball. We're going to call the game in a way that we can score points," Reich said. "We want to run it, that's no secret, that keeps them off the field, but the bottom line is we've got to score points."