Favre asks to be dismissed from Mississippi welfare lawsuit 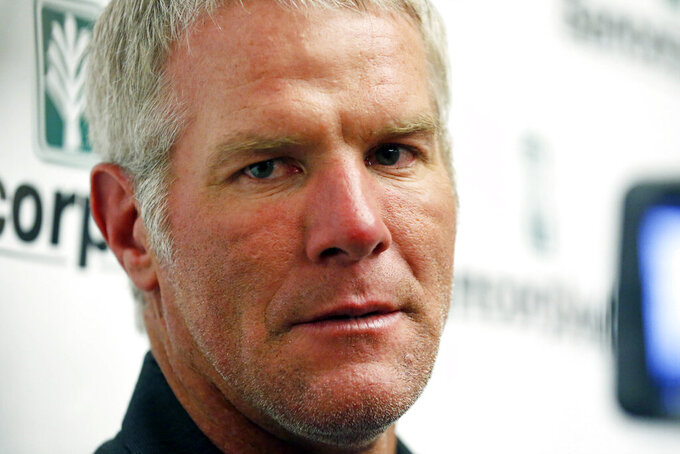 FILE - Former NFL football quarterback Brett Favre speaks with reporters prior to his induction to the Mississippi Hall of Fame in Jackson, Miss., on Aug. 1, 2015. Favre is asking to be removed from a civil lawsuit in Mississippi that seeks to recover millions of dollars in misspent welfare money that was intended to help some of the poorest people in the U.S. (AP Photo/Rogelio V. Solis, File)

JACKSON, Miss. (AP) — Retired NFL quarterback Brett Favre is asking to be removed from a lawsuit by the state of Mississippi that seeks to recover millions of dollars in misspent welfare money that was intended to help some of the poorest people in the U.S.

An attorney for Favre filed papers on Monday saying the Mississippi Department of Human Services “groundlessly and irresponsibly seeks to blame Favre for its own grossly improper and unlawful handling of welfare funds and its own failure to properly monitor and audit” how organizations used the money.

“Including Favre in this lawsuit has had the intended effect — it has attracted national media attention to this case," Favre’s attorney, Eric D. Herschmann, wrote in the filing in Hinds County Circuit Court.

Herschmann wrote that the lawsuit focuses on the welfare agency's “false insinuations concerning Favre's supposed involvement” rather than on the agency, “which in fact is responsible for allowing this scandal to occur.”

It was not immediately clear how soon Hinds County Circuit Judge Faye Peterson might consider the request.

Favre is not facing criminal charges. He is among more than three dozen people or companies being sued by the Mississippi Department of Human Services as it seeks to recover a portion of the money misspent in the state's largest-ever public corruption case. The department filed the lawsuit in May, saying the defendants “squandered” more than $20 million from the Temporary Assistance for Needy Families anti-poverty program.

Favre grew up in Mississippi and played football at the University of Southern Mississippi before a long career with the Green Bay Packers that included a win in Super Bowl XXXI. He was traded to the New York Jets in 2008 and played there one year before playing his final two seasons for the Minnesota Vikings.

Favre has repaid $1.1 million he received for speaking fees from the Mississippi Community Education Center, a nonprofit group that spent TANF money with approval from the Department of Human Services. But state Auditor Shad White said Monday that Favre still owes $228,000 in interest.

White's office has investigated the welfare spending. In response to questions Monday about Favre seeking to be dismissed from the civil lawsuit, White told The Associated Press: “Every party in the civil case is free to make the arguments that they would like to make, and I'm not going to comment on them. The court system can see the case through, and the judge can determine who owes what back.”

A former Department of Human Services director, John Davis, pleaded guilty in September to federal and state charges tied to the welfare misspending.

The director of the the Mississippi Community Education Center, Nancy New, pleaded guilty in April to charges of misspending welfare money, as did her son Zachary New, who helped run the center. Like Davis, they await sentencing and have agreed to testify against others.

In a Sept. 12 court filing in the civil lawsuit, an attorney for the Mississippi Community Education Center released several text messages about $5 million in welfare money that went toward a volleyball facility that Favre was seeking to get built at his alma mater, the University of Southern Mississippi, where his daughter was playing the sport. The messages were between Nancy New and Favre, between Favre and former Mississippi Gov. Phil Bryant and between Bryant and New. The messages were from 2017 to 2019, when the Republican Bryant was still governor.

That court filing said the nonprofit center agreed to pay Favre $1.1 million “for a few radio spots” to help fund the volleyball arena, which was also being called a campus wellness center.

Another court filing in September included text messages that showed Favre tried to get additional welfare money for an indoor practice facility for the University of Southern Mississippi’s football team. Bryant told him federal money for children and low-income adults is “tightly controlled” and “improper use could result in violation of Federal Law.”