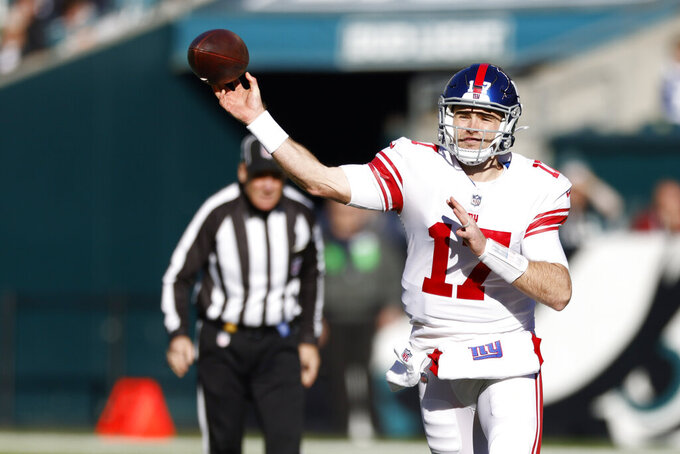 New York Giants' Jake Fromm plays during the first half of an NFL football game against the Philadelphia Eagles, Sunday, Dec. 26, 2021, in Philadelphia. (AP Photo/Laurence Kesterson)

PHILADELPHIA (AP) — Jake Fromm got a pep talk before his first NFL start from the ineffective New York Giants quarterback he replaced in the lineup.

Mike Glennon’s advice was simple: “I told him, he’s here for a reason. He belongs. Go have fun.”

Fromm got an early hook and gave coach Joe Judge little choice but to bench him in the third quarter with a debut that seemed to get worse with each drive. Fromm went 6 of 17 for 25 yards and one interception. Not for one drive. Or one quarter. The game.

His play went a long way toward helping the Philadelphia Eagles send the Giants to their fourth straight loss, 34-10 on Sunday.

“It’s not the way I wanted to have represented myself, my family or, of course, this organization,” Fromm said. “I’m going to learn from it. I don’t think it gets much worse than that.”

Judge said it was too early to decide if Fromm would get another chance to start next week at Chicago and play out the string in another double-digit defeat season for the Giants.

Judge has accepted the bulk of the blame in a 4-11 season — following a 6-10 mark last year. The Giants are eliminated from playoff contention.

Fromm was benched for Glennon in a reversal of last week at Dallas when Glennon was benched after throwing three interceptions and Fromm looked solid throwing for 82 yards. Judge went with Fromm, signed off the Buffalo Bills practice squad after Jones was hurt on Nov. 28, after Glennon lost three straight starts.

Fromm looked jumpy from the start and the Giants failed to reach 100 yards of total offense until the fourth quarter.

Still, Jalen Hurts and the Eagles got off to their own slow start and the game was tied 3-3 at halftime.

The 23-year-old Fromm had his chance to rally the Giants to a road upset.

Fromm, instead, threw a pass down the middle to Kenny Golladay that was intercepted by Eagles safety Rodney McLeod. That led to Boston Scott’s 3-yard touchdown run, which started a run of 31 straight points by the Eagles.

“That can’t be a situation where that also feels insurmountable,” Judge said.

Fromm, a standout at Georgia, was pulled for Glennon and that didn't improve the offense. Glennon threw an interception that linebacker Alex Singleton returned 29 yards for a touchdown. Glennon will be a free agent after this season.

The numbers were ugly all over the stat sheet:

— The Giants had only 108 yards passing.

— Saquon Barkley rushed for only 32 yards.

Glennon, a 32-year-old journeyman, or Fromm? Does it matter at this point for the Giants?

“I wish I would have gone out and handled my business and led us to victory,” Fromm said.