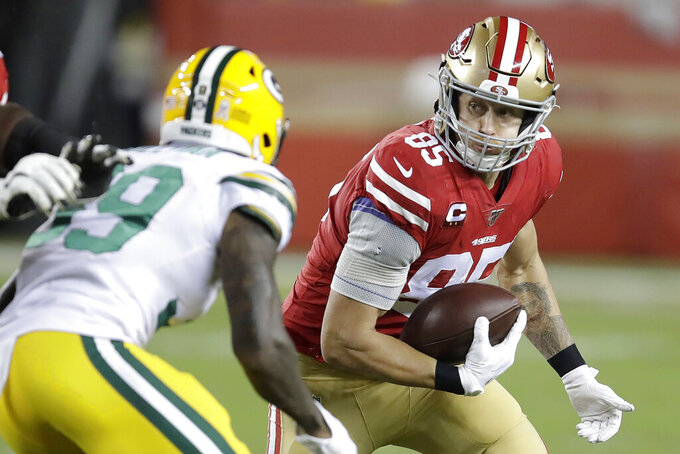 SANTA CLARA, Calif. (AP) — George Kittle’s absence from the San Francisco 49ers was evident in almost every aspect of the offense for two weeks.

Kittle's return last Sunday night got San Francisco off to a resounding start as the 49ers began a tough three-game stretch, and the Niners know they will need him even more the next two weeks with road games against first-place Baltimore and New Orleans.

"You can't replace a player like George Kittle," right tackle Mike McGlinchey said. "I think he's one of the best, if not the best player in the league. He's somebody that I'll be able to tell my kids about someday, that I played with that guy. ... Our offense goes through him as much as anybody else. He's a special player, a special leader, and we're very, very lucky to have 85 back.”

Kittle initially got hurt when he broke his ankle on the first play at Arizona on Oct. 31. Coach Kyle Shanahan described the injury as being akin to having bark coming off a tree and Kittle dealt with the pain and stayed in the game until a knee injury finally forced him to the sideline.

He missed two games with the injury before returning despite still feeling significant pain in his ankle. He took Wednesday off from practice but should be good to go again this week.

“It's football," Kittle said. "It's fine. It's a mindset. You just go out and play football. That's all it is."

The Niners offense dipped a bit in Kittle's absence, struggling to move the ball at all in a loss to Seattle and generating no running game the following week against Arizona.

San Francisco averaged only 2.9 yards per carry in the three games with Kittle either sidelined or limited but hit on all cylinders in the 37-8 victory over Green Bay on Sunday.

The 49ers averaged 5.1 yards per carry and Jimmy Garoppolo set career bests with 12.7 yards per attempt and a 145.8 passer rating. He completed all six of his throws to Kittle for 129 yards, with the biggest highlight coming on a 61-yard TD pass in the third quarter.

"George, he's awesome," Garoppolo said. "The energy he brings on the sideline, getting guys involved, getting guys talking in the huddle even, it's little things like that. Obviously, you guys see what he does on the field. I throw him a 2-yard route and he takes it for whatever, 20-30 yards, runs a great route, scores a touchdown. It's all the little things that he does, though, that goes so unnoticed."

Kittle is such a big part of an offense that relies so heavily on play-action passes because his blocking helps key success on the ground and he is one of the most dangerous receivers, especially when he gets in open space.

Kittle set a record for tight ends last season with 1,377 yards receiving, with a staggering 870 coming after the catch. He hasn't been as prolific this year with 52 catches for 670 yards but he's still as important.

"When he's out there we just can stretch the defense more, which helps us get outside," Shanahan said. "It also helps us cut back, so it gets our run game going. And when it gets our run game going, everyone knows what he can do in the pass game. I think a lot of his catches today were off of run actions, especially the 60-yarder. They came up on the run, cut the crosser and got him over the top. It kind of opens up everything just like all good players do."