Giants and Washington not fighting for playoffs this year 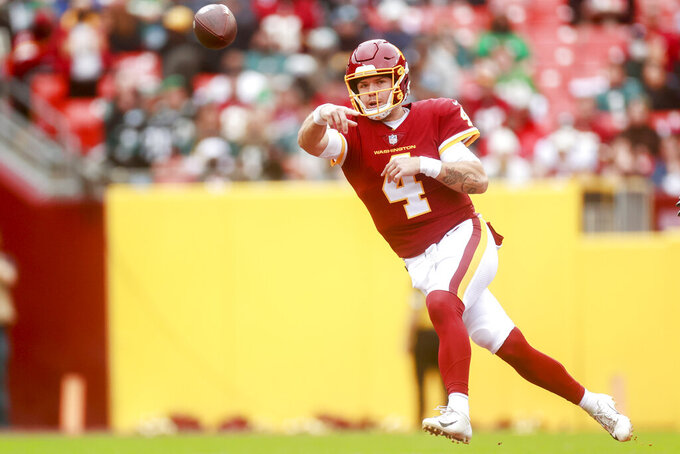 Rivera got Washington to the playoffs for the first time in five years, overcoming injuries and a pandemic to win the NFC East with a 7-9 record. Judge and the Giants were in the race until the final night of the season, finishing second with a 6-10 mark.

While many expected more, this season has been a disappointment for both Washington (6-10) and the Giants (4-12), especially on the injury front.

The teams will meet Sunday at MetLife Stadium with little or nothing on the line. The following day, they will pack up and head home for the offseason, leaving frustrated fans unhappy.

Rivera said Washington was fortunate to win the division last year. They played hard, got hot at the right time and things fell their way.

“I think this year is a bit more of what I expected," he said. “I didn’t expect to win the division right away, and I didn't expect to win at 7-9, to be honest, but we won. Expectations here rose more than it should have. I think we have developed our football team and the things that we’ve done, I think we’re kind of heading the direction. Obviously, you love a better record.”

Rivera is in good position for next season. Judge has to hope Giants co-owners John Mara and Steve Tisch believe he has built a foundation that will deliver a first postseason berth since 2016 — SOON.

Judge seemed to make an impassioned 11-minute plea after last weekend's loss to the Bears, telling reporter and everyone who would read their stories or see his video clip that the Giants have laid a foundation to end what is now five straight years of double-digit losing seasons.

Whether he gets the chance remains to be seen.

With starter Daniel Jones (neck) and backup Mike Glennon (wrist) out for the season, second-year pro Jake Fromm will get his second start.

The Georgia product got his first the day after Christmas and was 6 of 17 for 25 yards before being replaced by Glennon in a 34-10 loss to the playoff-bound Eagles.

“You can’t change the past, so you just learn from it. You move on and try to do better next time,” Fromm said this week.

Practice squad quarterback Brian Lewerke, who has never taken a snap in an NFL game, is expected to be the backup.

With Washington set to reveal its new name Feb. 2, this will be the final game the team is known as the Washington Football Team.

The temporary name lasted two seasons. The team dropped its old name in the summer of 2020 after decades of criticism it was offensive to Native Americans and after pressure mounted from sponsors in the midst of a national reckoning on race in the U.S.

“It’s the Washington Redskins to me because I’ve been watching them since I was little,” said rookie running back Jaret Patterson, who grew up in the area. “In my heart, they will always be the Redskins to me. But it’s kind of cool getting a new name. I kind of like just going into a new era.”

This has been a miserable season for the Giants' wide receivers. The group has caught four touchdown passes in 16 games. The last was a 5-yard catch by Dante Pettis against Carolina on Oct. 24.

The other three TD catches by the receivers were by Sterling Shepard, Darius Slayton and John Ross. Of the team’s 14 TD catches, tight end Evan Engram has a team-high three.

Kenny Gollaway, who signed a $72 million contract to make big plays, does not have a TD catch. That puts him one behind left tackle Andrew Thomas.

When Taylor Heinicke was out of football and taking college classes online in the fall of 2020, he never expected a deal as Washington’s quarantine quarterback to turn into this. He started Washington’s playoff game against Tampa Bay, earned a two-year contract and replaced injured veteran Ryan Fitzpatrick in the season opener this year.

The Giants game is expected to be his 17th NFL start. His first was with Carolina in 2018 under Rivera, and the rest have come since in Washington.

Heinicke has thrown for 3,299 yards, 20 touchdowns and 15 interceptions this season. He and backup Kyle Allen are likely competing for a spot next season, even if Washington takes a QB prospect high in the draft.

Giants linebackers Azeez Ojulari and Lorenzo Carter have been the key playmakers on the defense.

Carter, who has battled a number of injuries in his four seasons with New York, has finally started to flash his talent lately. He has sacks in three straight games, along with two forced fumbles and three passes defended.

“I told him yesterday, I’m going to start calling him Mr. Carter,” defensive coordinator Pat Graham said Thuesday. “Mr. Carter showed up. Who knows the exact reason? I know he works hard; he works really hard during the week and I’m happy for him that it’s starting to come together, having some success.”