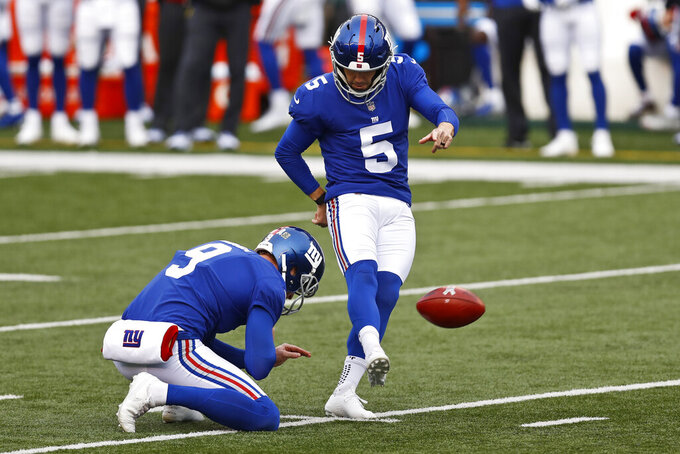 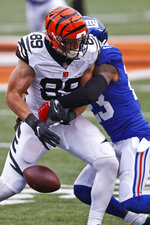 EAST RUTHERFORD, N.J. (AP) — If the New York Giants are to get back to the playoffs for the first time since 2016, they have to start beating teams with winning records.

The Giants (4-7) got back in the hunt for the title in the weak NFC East by beating Cincinnati 19-17 for their third straight win. While that might indicate a team is starting to peak, the level of competition has not been the best. The run has been against Washington, Philadelphia and the Bengals. All have losing records, and New York beat Washington twice.

The schedule gets tougher in the final five weeks. The next four games are against the NFC West-leading Seahawks in Seattle; Kyler Murray and the Cardinals (6-5); Cleveland (8-3) and Baltimore (6-4). Dallas (3-8) is the final game, but the Cowboys have owned the Giants in recent years.

Not only do the Giants need to win, they probably have to do some of it without quarterback Daniel Jones. He injured his right hamstring Sunday, and few players come right back from that type of injury.

Rookie coach Joe Judge said an MRI on Monday raised questions instead of providing answers. Expect veteran Colt McCoy to start in Seattle and don't be surprised if the Giants sign a veteran to back him up.

Judge said Jones, who has started every game this season, has to show he can protect himself if he wants to play.

Teammates said they are confident how they are playing and with McCoy running the offense.

“I don't really care who we are playing,” said receiver Sterling Shepard, the last player left on the roster from the '16 team. “We are focused on our abilities and what we can do.”

Field goals. Despite being isolated for more than a week after testing positive for COVID-19, Graham Gano kicked field goals of 49, 40, 39 and 32 yards. He has made 24 consecutive attempts and 25 of 26 this season.

Special teams kickoff and punt coverage. Brandon Wilson scored on a team-record 103-yard kickoff return for the Bengals and Alex Erickson was a step away from breaking for a go-ahead touchdown on a 29-yard punt return in the final minute. Cam Brown made a saving tackle at midfield. The defense forced a turnover on the next play to preserve the two-point win.

Punt coverage also got burned in the the third quarter when the Bengals used a direct snap on a fourth-and-6 from their 20 to get a first down.

Defensive end Nikos Lalos. Promoted from the practice squad for his NFL debut, the rookie from Dartmouth intercepted a Brandon Allen pass with 32 seconds remaining in the third quarter.

Offensive tackle Cam Fleming. The right tackle was flagged for three holding penalties and a false start. Two of the holds came late in the fourth quarter, with the first one nullifying a pass for a first down. The third hold was declined after a third-down incompletion in the first quarter.

Jones is the big one. LB Kyler Feckrell left the game with a calf injury and his status is uncertain. Safety Nate Ebner left with a knee injury and Judge hopes to have him back soon.

700 —The victory was the Giants’ 700th in the regular season in their 96-year history. They join the Chicago Bears (774) and Green Bay Packers (764) as the only franchises with 700 victories. The franchise closest to the Giants is the Pittsburgh Steelers, whose 10-0 start has increased their victory total to 641.

Get McCoy ready to start as fast as possible. Former Northwestern quarterback Clayton Thorson is on the practice squad but the Giants have to decide whether he can be the backup to McCoy if Jones can't play. Alex Tanney and Cooper Rush were in training camp and know the system.