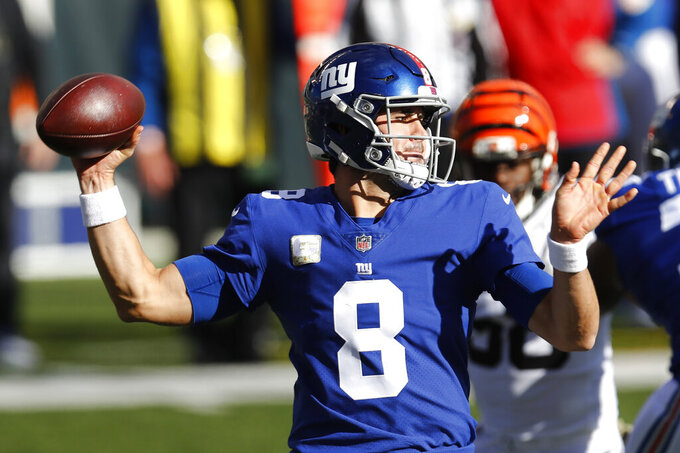 EAST RUTHERFORD, N.J. (AP) — New York Giants quarterback Daniel Jones is listed as questionable for the game against the Arizona Cardinals on Sunday.

Jones was a full participant in practice on Friday for the first time since his hamstring injury against the Cincinnati Bengals on Nov. 29. The 23-year-old quarterback was limited during practice on Wednesday and Thursday.

Backup Colt McCoy started at quarterback last week in the Giants' 17-12 win over the Seattle Seahawks. McCoy completed 13 of 22 passes for 105 yards, one touchdown and one interception.

The Cardinals expect to have veteran receiver Larry Fitzgerald after he was activated from the reserve/COVID-19 list on Wednesday. Fitzgerald spent 13 days on the list and missed two games.

Arizona coach Kliff Kingsbury said on Friday that Hopkins was battling “lingering soreness” but should be “ready to roll” against the Giants.

Sunday's game between New York (5-7) and Arizona (6-6) is crucial to both teams' playoff hopes. The Giants are tied with Washington for first place in the NFC East. The Cardinals are third in the NFC West behind the Rams and Seahawks.