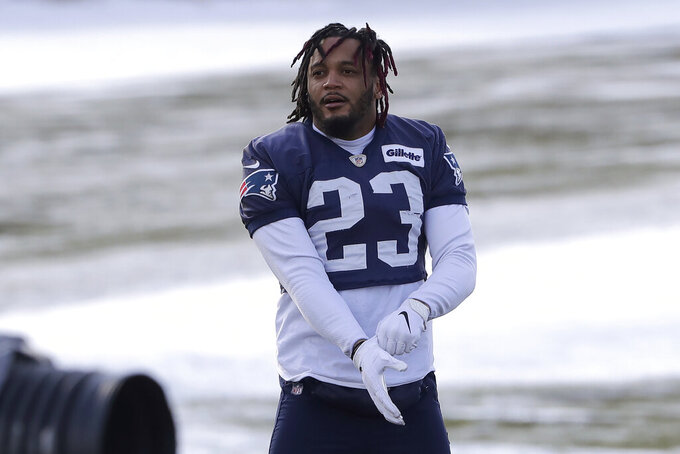 FILE - New England Patriots strong safety Patrick Chung pulls on a glove while warming up during an NFL football practice in Foxborough, Mass., in this Wednesday, Dec. 18, 2019, file photo. More than half of the 67 NFL players who opted out of the 2020 season amid the COVID-19 pandemic are no longer with the same team and almost two dozen aren't on anyone's roster. The Patriots had a league-high eight players opt out, including safety Patrick Chung and fullback Dan Vitale, both of whom retired this year along with two other opt outs: Cardinals O-lineman Marcus Gilbert and Panthers linebacker Jordan Mack. (AP Photo/Steven Senne, File)

ENGLEWOOD, Colo. (AP) — More than half of the 67 NFL players who opted out of the 2020 season amid the COVID-19 pandemic are no longer with the same team. Almost two dozen aren't on anyone's roster.

Thirty-three of the players who opted out have returned to open 2021 training camp with their same team. Twenty-nine were waived or released before camps opened, four retired and one was traded.

That represents a whopping 50.7% turnover rate for this subset of players, far outdistancing the average annual NFL roster turnover rate of 36.2%.

“Oh no, not at all. I mean, this game has no loyalty, let's be real,” said Faulk, who carved out a 12-year playing career with the Colts and Rams that landed him in Canton a decade ago.

“The reality is if they can find a way to win without you, they will," Faulk said. “That's what they're supposed to do. That's the way it is. This game needs no one. The machine will continue to churn.”

Among the players who are back with their teams is right guard Laurent Duvernay-Tardif, who put his doctorate in medicine to use treating COVID-19 patients in his native Canada.

Every team except the Falcons and Steelers had at least one player opt out last year. The Patriots had a league-high eight, including safety Patrick Chung and fullback Dan Vitale, both of whom retired this year along with two other opt outs: Cardinals O-lineman Marcus Gilbert and Panthers linebacker Jordan Mack.

Linebacker Dont'a Hightower is one of just three New England opt outs still with the Patriots, along with tight end Matt LaCosse and running back Brandon Bolden.

The Patriots traded O-lineman Marcus Cannon to Houston and jettisoned O-lineman Najee Toran, who signed with Washington, and receiver Marqise Lee, who is among the 21 opt outs who remain free agents.

Among last year's opt outs who have landed with other teams are former Raiders cornerback D.J. Killings, who signed with Calgary in the Canadian Football League, and wide receiver Marquise Goodwin, who reverted back to the 49ers following his trade to the Eagles, was subsequently released by San Francisco and signed with the Bears.

The opt out whose status drew the most interest in 2021 was right tackle Ja'Wuan James, who signed with the Ravens after his unceremonious departure from Denver.

On the same day he joined the Ravens, James filed a $15 million grievance against the Broncos, who released him in May after he ruptured an Achilles tendon during an off-site workout.

James, who played sparingly for the Broncos in 2019 after they made him the NFL's highest-paid right tackle, was injured while heeding his union's call to work out on his own.

James' two-year deal with Baltimore is worth up to $9 million and includes $500,000 this year while James rehabs with the Ravens.

James’ injury became a flashpoint between the NFL and the NFLPA over the “non-football injury” designation, which relieves teams from having to pay players their full salaries if they’re injured off site. The NFL used James’ injury to remind teams that players are protected against lost wages if they get hurt at the team’s facility but don’t have the same protection if they’re injured working out anywhere else.

No players chose to opt out of the 2021 season.

Now that there are vaccinations for COVID-19, players who have been jabbed no longer have to adhere to strict protocols such as mask wearing, meeting virtually, and social distancing at team headquarters. But players who decline to get vaccinated still fall under most of the 2020 guidelines that require daily tests and limits on interactions with teammates.

Players who voluntarily opted out in 2020 received a $150,000 advance for the season and those who were considered high risk for medical reasons received a $350,000 stipend.

For some, those paychecks were their last in the NFL.

“I'm not surprised that it's 50% because it happens yearly anyway," Hall of Famer Rod Woodson said of the 34 players who have moved on.

“You see a lot of new faces every year. That's why they have a draft. They don't have a draft every four years. They have it every year. And they draft players to replace other players they've got on the team.”