Hilton returns to Colts practice, could play against Texans 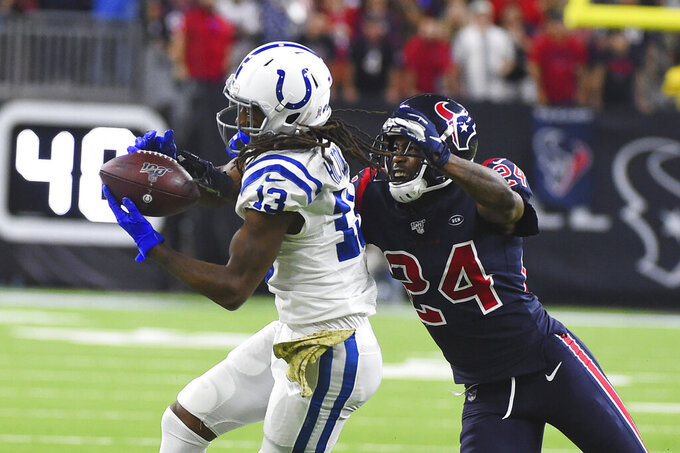 FILE - Indianapolis Colts wide receiver T.Y. Hilton (13) makes a catch in front of Houston Texans cornerback Johnathan Joseph (24) during the second half of an NFL football game in Houston, in this Thursday, Nov. 21, 2019, file photo. Colts receiver T.Y. Hilton was back on the practice field for Wednesday's, Oct. 13, 2021, light workout. The four-time Pro Bowler has been designated for return from injured reserve after having neck surgery in August and coach Frank Reich is optimistic Hilton will be cleared to play this weekend against the Houston Texans. (AP Photo/Eric Christian Smith, File)

If all goes well over the next few days, he might be playing Sunday against one of his favorite teams — Houston.

The four-time Pro Bowler has been designated for return from injured reserve after having neck surgery in August and coach Frank Reich is optimistic Hilton will be cleared to play this weekend.

"We'll evaluate it as we go, but I've watched him work out over the last few days and I know he's hitting some of his normal T.Y. speed, yardage type of things, “ Reich said. ”It's a big emotional boost for the team and it’s Houston week — probably not a coincidence."

Hilton has been Indy's most reliable receiver since replacing Reggie Wayne as the team's top target in 2015, and nobody has been more efficient against the Texans than the former Florida International star.

He has 102 receptions for 1,803 yards and 11 touchdowns in 19 career matchups against Houston with eight 100-yard games, including one last season — his first in 22 games, including the playoffs.

The timing for Hilton's return couldn't be better, either, after Indy blew a 16-point, fourth-quarter lead in an emotional overtime loss at Baltimore. Indy has lost four of its first five games.

But Hilton's return already has energized the locker room as the Colts get a critical opportunity to turn around their season in their first home game since mid-September.

“T.Y.'s a dog," 2020 All-Pro defensive tackle DeForest Buckner said. “His presence, his leadership is always great to have in the locker room and after the surgery he had, it’s exciting to get the Ghost back on the field."

Hilton was injured when he landed awkwardly after taking a hard hit in the team's final training camp practice. Less than a week later, Colts general manager Chris Ballard announced Hilton had surgery on a disc to relieve pain Hilton.

The 31-year-old, who is the fourth-leading receiver in franchise history, started the season on injured reserve but was expected to return this season. He's getting closer by the day.

“It’s exciting for me, I think it’s exciting for the whole team," quarterback Carson Wentz said. “Everybody knows what kind of a player T.Y. is on the field, but he’s more so in the locker room as a leader. I think seeing him in the walkthrough today, everybody got a little excited."

Hilton is only one part of a long list of injury concerns heading into this weekend.

Reich said an MRI on the hip of injured kicker Rodrigo Blankenship revealed “a little something there” and that a decision on his status for Sunday will be determined later this week. The second-year player from Georgia missed an extra point and two late field goals Monday, including a 47-yarder as time expired in regulation.

So the Colts brought in multiple kickers for workouts Wednesday including, reportedly, Michael Badgley, who competed against Adam Vinatieri at Indy's training camp in 2018.

“I think we’ll make a decision pretty soon. We want to get all the information before we pull the trigger," Reich said, referring to Blankenship. “I think whatever it is, it's something that's going to be short term, hopefully."

Reich didn't have many more answers about Indy's depleted secondary.

“We’re going to see how it goes this week," Reich said when asked about Ya-Sin. “Last week, I would have thought for sure this week. It’s not a setback, it's just not going as fast as we wanted it to go."