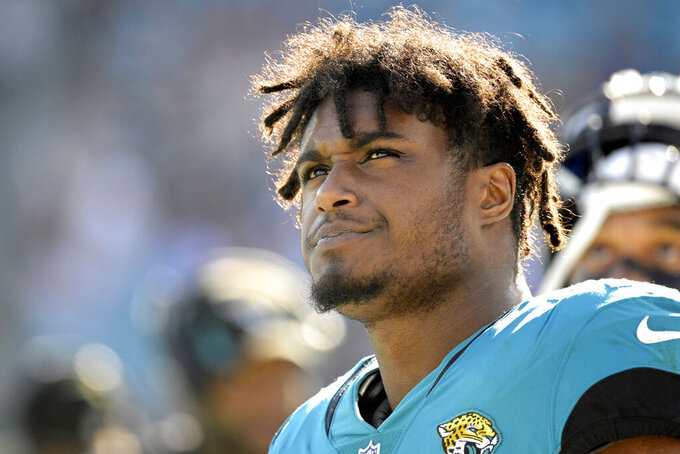 FILE - Jacksonville Jaguars outside linebacker Myles Jack watches from the sideline during the second half of an NFL football game against the Indianapolis Colts, on Jan. 9, 2022, in Jacksonville, Fla. Jacksonville followed its free-agent spending spree with a cost-saving move: cutting veteran linebacker and defensive captain Myles Jack on Tuesday, March 15, 2022. (AP Photo/Phelan M. Ebenhack, File)

The Jaguars created more than $8 million in salary-cap space by releasing Jack, who started 82 games over the last six seasons and will forever be remembered in franchise lore for quickly — and possibly erroneously — being ruled down following a New England fumble in the fourth quarter of the 2018 AFC championship game. Tom Brady rallied the Patriots after the call, preventing Jacksonville from making its first Super Bowl.

Dumping Jack will cost the Jaguars $4.8 million in dead money in 2022 and save them $8.35 million against the cap.

A second-round draft pick from UCLA in 2016, Jack signed a four-year extension worth $57 million in new money just before the 2019 season. But he struggled at middle linebacker and ended up moving back to weak-side linebacker the following year. He wasn't a great fit in Jacksonville's 3-4 scheme last year, either, although he led the team with 106 tackles.

Jack's departure marks the third consecutive year the Jaguars moved on from their Walter Payton Man of the Year nominee. They traded defensive lineman Calais Campbell in 2020 and cut kicker Josh Lambo in 2021.

His release came one day after Jacksonville committed $230 million to bring in six free agents, including Atlanta linebacker Foyesade Oluokun, who is expected to fill Jack's role. The Jaguars also could lose fellow linebacker Damien Wilson in free agency.

General manager Trent Baalke and new coach Doug Pederson took a big swing at improving their roster in free agency, even if they seemingly overpaid for some of the pending newcomers:

—Scherff is getting a three-year, $49.5 million deal that includes $30 million guaranteed.

—Jones is getting a three-year, $24 million contract that includes $14 million guaranteed.

The Jaguars created enough cap space to add at least another rebuilding piece in free agency and might not be done parting with aging veterans. They want to primarily build through the draft, though, which explains why so many of the free-agent deals are short-term contracts.

They have the No. 1 pick for the second straight year and are expected to decide between Alabama offensive tackle Evan Neal and Michigan pass rusher Aidan Hutchinson.