Jaguars trying to maintain upper hand in rematch with Colts 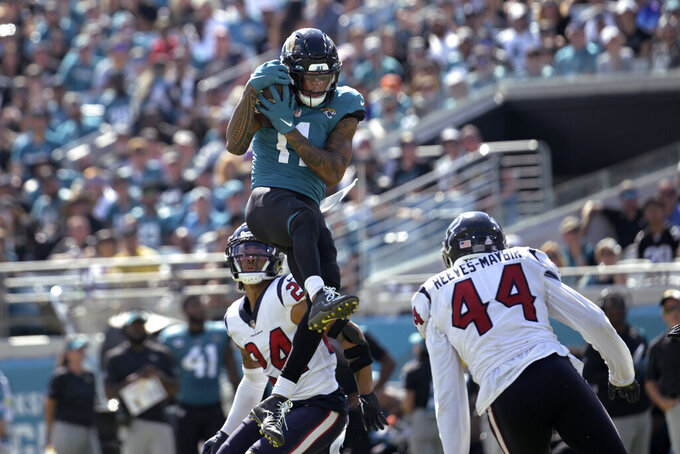 OPENING LINE: Colts by 2 1/2, according to FanDuel SportsBook.

TURNOVER DIFFERENTIAL: Jaguars plus-1; Colts minus-6.

JAGUARS PLAYER TO WATCH: WR Christian Kirk, coming off a one-catch game, looks to get back to his early season ways. Kirk caught 18 passes for 267 yards and three TDs in the first three games. He’s had three receptions for 71 yards in the past two outings.

COLTS PLAYER TO WATCH: LT Bernhard Raimann. The rookie struggled early in his starting debut last Thursday, but Indy believes this third-round pick is its left tackle of the future and now the present. Raimann played a cleaner second half at Denver after being flagged three times for holding and four times overall in the first two quarters. Indy needs him to see more improvement this week.

KEY MATCHUP: Jacksonville run defense vs. Indy's running backs. When the Jags pulled out to a large early lead last month, they essentially forced the Colts to become one-dimensional. With defending NFL rushing Jonathan Taylor (toe, ankle) and his backup Nyheim Hines (concussion protocol), both on the injury report, if it happens again the Jags would have the upper hand.

SERIES NOTES: Jacksonville has won four of the past six in the series, but has lost each of the past two seasons in Indy. ... The Jaguars are seeking their third season sweep against the Colts. Jacksonville won both matchups in 2011 and 2017. ... These teams have the longest division title droughts in the AFC South. Jacksonville's only championship came in 2017. Indy hasn't won a division crown since 2014 after winning nine between 2003-14.

STATS AND STUFF: The Jaguars posted the NFL's first shutout of the season in a 24-0 Week 2 victory over the Colts. ... RB Travis Etienne Jr. had a career-best 114 yards from scrimmage and averaged 7.1 yards per carry in this season's first meeting with Indy. ... Trevor Lawrence has more completions (472) and yards passing (4,873) than any quarterback drafted in 2021, but has thrown three interceptions and fumbled four times over the past two weeks. ... WR Christian Kirk has five receptions of at least 25 yards this year, tied for first in the NFL. ... Jags LB Devin Lloyd leads all rookies in tackles (49). ... Jacksonville coach Doug Pederson and Colts coach Frank Reich won a Super Bowl together with the Philadelphia Eagles following the 2017 season. ... The Colts have not topped the 20-point mark or held a halftime lead in seven consecutive games, going back to last Christmas. ... QB Matt Ryan has been sacked 21 times this year, tied for No. 1 in the league with Matthew Stafford. His 11 fumbles are one short of his single-season career high. ... Ryan needs 251 yards passing to move past Dan Marino (61,361) for seventh in NFL history. ... Rookie WR Alec Pierce has 15 receptions and tied Hall of Famer Marvin Harrison for the most catches in franchise history through four games. ... Indy's defense has forced 16 three-and-outs and allowed only nine rushing plays of 10 or more yards. Both are tied for second in the league. ... K Chase McLaughlin was this week's AFC special teams player of the week after making four field goals and accounting for all of Indy's points in last week's win at Denver.

FANTASY TIP: In what could be a low-scoring game with the status of some key offensive players in doubt, choosing either defense make sense. The safest offensive play might be Etienne, whose versatility could prove essential against Indy's stout defense.