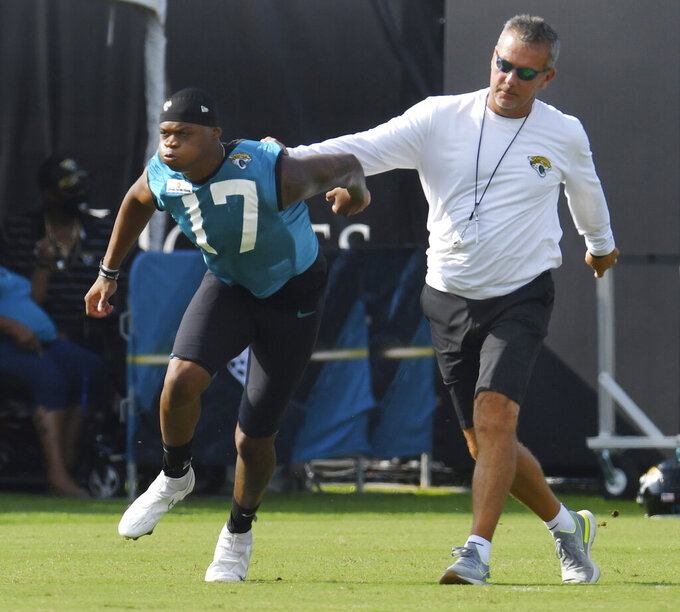 Jacksonville Jaguars head coach Urban Meyer holds wide receiver DJ Chark Jr. by the jersey as he works with him at the start of the team's NFL football practice in Jacksonville, Fla., Friday, July 30, 2021. (Bob Self/The Florida Times-Union via AP)

JACKSONVILLE, Fla, (AP) — DJ Chark’s contract season is off to a shaky start.

The Jacksonville Jaguars receiver had surgery to repair a broken finger on his right hand, coach Urban Meyer said Sunday, and will miss the remainder of training camp and the preseason. Meyer insisted Chark will be ready for the Sept. 12 season opener at Houston.

But his latest injury raises questions about Chark’s long-term prospects with the team that drafted him in the second round in 2018.

The former LSU standout has missed nine games in three years, including two stints on the sideline last season with chest, back and rib injuries.

Meyer challenged the 6-foot-4 Chark in the offseason, calling him “a big guy that played little” in 2020.

Chark responded by adding nearly 10 pounds of muscle in the spring.

“This whole world is about increasing someone’s value, and DJ Chark increases value by getting bigger and stronger and playing that way,” Meyer said.

But the Jaguars also hedged their bet on Chark by signing 10-year veteran Marvin Jones to a two-year, $12.5 million contract in free agency, then adding former first-rounders Phillip Dorsett, Laquon Treadwell and Tavon Austin to the position group.

Treadwell and Austin were on the street before signing with Jacksonville this summer. Dorsett and Treadwell have been among the most impressive receivers in camp.

“It’s amazing to me,” Meyer said. “What was this guy doing last week? Next thing you know he’s playing for the Jaguars. I admire guys like that. They’ve been really good. Treadwell came in, and let me tell you, he’s in the hunt for a (roster) spot.”

Jones, Chark and second-year pro Laviska Shenault appear to be locks for the 53-man roster. But Chark also is vying for a new contract, whether in Jacksonville or elsewhere in the league.

“I’m pretty blessed right now and I have the mindset that I’m going to be taken care of either way,” Chark said last week. “I just put my faith in God, let that go. But I just want to get better and play ball. But like I said, I’m way, light years, ahead of where I was a few years ago financially. So, I’m all right, it’s cool.”

He took a step back last year, whether it was because of the injuries or because he played with three quarterbacks and in a lackluster offense.

“Yeah, he didn’t play well last year and, obviously, his (second) year he was very good,” Meyer said. “I just didn’t like his size, his strength. I just thought it was way below average, way below what we expect from our receivers. He was told that and the best thing about DJ is he addressed it and hit it very hard.”

NOTES: Meyer lamented the loss of legendary coach Bobby Bowden. Meyer went 5-0 against Bowden as Florida's coach, but they bonded on Nike trips. “A dear friend and one of the greatest people I’ve ever met in my life. What a life he lived, though, 91 years of a great life.” ... Second-year CB CJ Henderson, who returned to practice earlier in the week after testing positive for COVID-19, was absent for ”personal reasons." ... DT Malcom Brown had the defensive play of Sunday's scrimmage when he picked up a ball that slipped from QB Jake Luton's grasp and returned it for a touchdown. QB Trevor Lawrence had the best offensive play, a TD strike to TE James O'Shaughnessy in which the pass threaded tight coverage.