Jets' Brown out with shoulder injury, Fant to start at LT 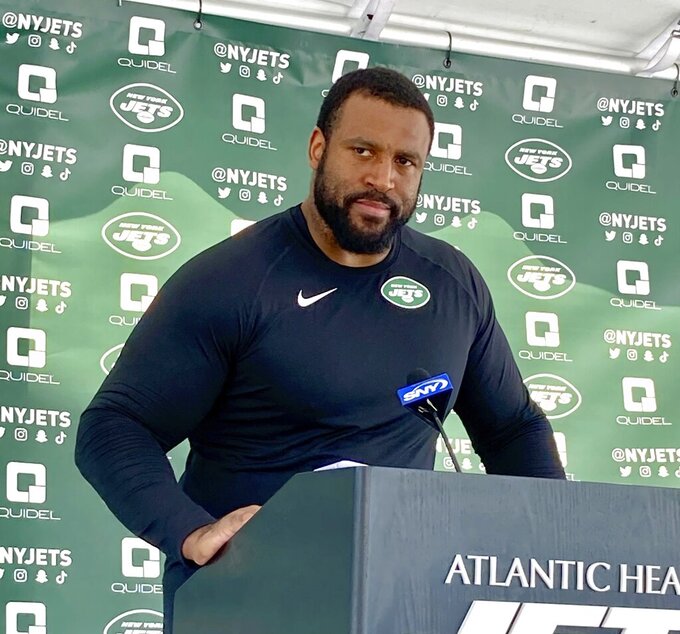 FLORHAM PARK, N.J. (AP) — New York Jets left tackle Duane Brown will miss the season opener against the Baltimore Ravens with a shoulder injury that could sideline him for at least a few weeks.

Coach Robert Saleh announced Friday the team was still gathering medical information on Brown's shoulder, but acknowledged there's a chance the 37-year-old offensive lineman could end up on injured reserve. That would sideline him for at least four games.

“Him going to the left side this week,” Saleh said of the versatile Fant, "he’s making it very easy for this transition to happen.”

Saleh said he thought Brown was injured in practice Monday. After an off day, Brown didn’t practice Wednesday or Thursday — and wasn't at the facility Thursday during the practice session because he was having his shoulder evaluated.

Brown was signed to a two-year, $22 million contract last month after right tackle Mekhi Becton was lost for the season because of a knee injury. Fant, who was initially slated to start at left tackle, slid over to the right side after Brown — who has played left tackle all 14 of his previous NFL seasons — was signed.

Fant opened last year as the right tackle, but moved to left tackle when Becton was hurt in Week 1. Fant hadn’t practiced until this week on the left side since Brown was signed in mid-August.

“Obviously, I'm frustrated, still,” Fant said. “It's the second time in a row I've had to move the week of the game. I can't control it, but it's obviously a frustrating situation. I just want to get comfortable and play a position, and I haven't been afforded that.”

Saleh acknowledged Fant — who said he's most comfortable playing left tackle — has been put in a tough spot again.

“I’m sure it’s frustrating for George,” Saleh said. "Everybody wants to settle into their job. Credit to George. He is an uber-athlete, he’s got great versatility. His whole career, he’s always been a team guy first. He’s a phenomenal teammate.

“For him to sacrifice and jump left, right, left, right, it’s not easy for him. But at the same time, he’s so gifted and so athletic and smart enough to be able to do that.”

Fant said it's “almost impossible” to be fully prepared to switch from one tackle spot to the next in a week.

“It's a situation where it's, yeah, I've played both positions,” he said, “but it's still a situation of preparing and understanding how you need to play certain plays on certain sides and things like that.”

Fant, who had offseason knee surgery, was limited the first two days of practice but Saleh said he would be fine to play.

Saleh said the Jets didn't consider signing an aging veteran a risk since Brown started every game the last two years, and all but four in the last four seasons.

"The guy moves around like he’s 29, so he’s got a lot of life left in his body,” Saleh said of Brown, who was brought along slowly after signing with the Jets. “You can always play the hindsight game, but with Duane there were no indicators.”

Brown being sidelined caps a rough week of injury news for the Jets, who announced Wednesday that quarterback Zach Wilson would not return until the Jets’ game at Pittsburgh on Oct. 2 at the earliest while recovering from a bone bruise and torn meniscus in his right knee. Joe Flacco is starting Sunday in Wilson’s place.

While Fant moving to left tackle shouldn't be much of an adjustment, having Mitchell start on the right side in his NFL debut will be. Conor McDermott would normally have been the natural choice, but he is still recovering from a preseason ankle injury that limited him in practice this week.

“If you’re on an NFL roster, whether you’re on the practice squad or not, you’re one play away,” Saleh said. “I mean, that’s how quickly it can happen. And I said it before: Max is much further along than we thought he’d be at this point. So we’re very confident he’ll be able to step in and do his job.”

When the 6-foot-6, 307-pound Mitchell was drafted in April out of Louisiana, he was initially considered a developmental-type player. The injuries along the offensive line sped that up.

“We think his acceleration is going to go even faster because there's nothing like getting reps in the NFL and getting baptized early in your career,” Saleh said. “We have a lot of faith in him."

Mitchell said it will definitely be a challenge, but he fully expects to perform at a high level.

“Here we are,” Mitchell said with a big smile. I kind of get goosebumps thinking about it. I just worked my (butt) off, really and just persevered with my tenacity and the help of other people, too, my coaches."