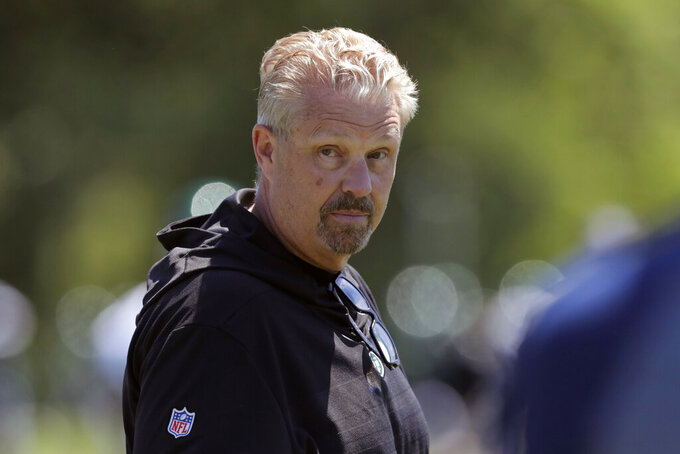 FILE - In this June 4, 2019, file photo, New York Jets defensive coordinator Gregg Williams looks on as his players run drills at the team's NFL football training facility in Florham Park, N.J. Odell Beckham Jr. says former Browns defensive coordinator Gregg Williams instructed his players to "take me out" of a preseason game in 2017. The Pro Bowl wide receiver sustained an ankle injury when Cleveland's Briean Boddy-Calhoun cut his legs out while he was with the New York Giants. Beckham said current Cleveland players told him that Williams instructed them to "take me out of the game, and it's preseason." (AP Photo/Julio Cortez, File)

The New York Jets defensive coordinator thinks everyone else should, too.

Beckham made headlines Thursday when he accused Williams of getting him injured in a preseason game two years ago when the wide receiver was with the Giants and Williams was running Cleveland's defense. Beckham said he was told by current Browns teammates that Williams instructed them to "take me out of the game."

Williams managed to keep a straight face for a moment when asked about the allegations that he teaches players to use dirty tactics against opponents.

"Odell who?" he asked jokingly before grinning.

Williams said he had just heard about Beckham's comments, and then turned serious.

Beckham said he jumped to catch a pass during a 2017 preseason game and was hit low by former Browns cornerback Briean Boddy-Calhoun as he came down. Beckham severely sprained his ankle on the hit, which he believes was instructed by Williams and has led to other leg injuries.

"You guys are cooperating by giving him attention," Williams said to reporters. "Just don't give him attention."

Williams was then asked if it's discouraging to him that his reputation is being challenged by one of the league's most dynamic players.

"That's your opinion," Williams shot back.

When a reporter said Beckham, a three-time Pro Bowl receiver, is one of the NFL's better players, Williams got snippy.

"What's New York's opinion, the Giants' opinion? What did the Giants do? So that's not a question for me."

Beckham was traded by the Giants in March to the Browns after five seasons of highlights and headaches.

A reporter then again asked if Williams doesn't think Beckham is one of the NFL's most dynamic players.

Williams added that people can believe what they want about him, but those who know him well understand what type of person he is.

"I don't have to defend that," the coach said.

Williams was suspended by the NFL for the entire 2012 season for his role in the "Bountygate" scandal in which the New Orleans Saints were found to have operated a bounty system in which players were paid bonuses for hard hits and deliberately injuring players.

Williams got testy when he was asked how he could say he has never instructed his players to hurt opponents.

"Was that right or wrong?" Williams asked. "Again, I don't want to talk about that. You can talk about Cleveland."

Then, Williams raised his voice: "Next!"

Williams reiterated that he teaches his players to play smart and not get penalties. He added that his defenses don't violate the rules put in place by the NFL's competition committee.

"We play hard and those guys over there, they know that. Those players over there know that, too. All the really good players in the league know that. And that's how you do it, offensively, special teams - you do that."

Williams will be facing the team he coached the last two seasons, including the final eight games last year as the Browns' interim coach. He was a favorite for Cleveland's vacancy in the offseason, but the team picked Freddie Kitchens instead.

"I had a very good experience over there the last two years," Williams said. "It was kind of on my checklist to get a chance to go there at some point in time, and it was good."

NOTES: Jets coach Adam Gase said the team isn't considering placing QB Sam Darnold on the injured reserve list with a return designation. Darnold is dealing with mononucleosis and likely will be out several weeks. But Gase said Darnold will be back sooner than the eight-game minimum if he went on IR. ... LB C.J. Mosley (groin) said his rehabilitation is going well and he expects to play Monday night. He said the big test will be how he performs at practice Saturday.