Jets' Siemian out for year with ankle injury, Falk to start 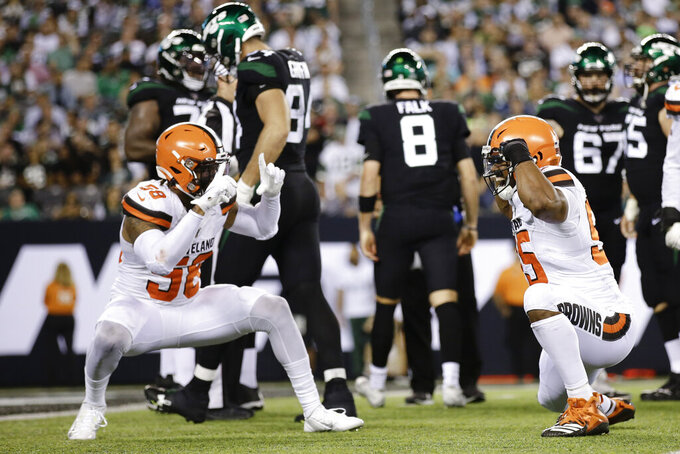 Trevor Siemian will be sidelined for the rest of the season with an ankle injury, and third-stringer Luke Falk will start for New York at New England on Sunday — and beyond until Sam Darnold returns from illness.

Coach Adam Gase announced Tuesday that Siemian has ligament damage, suffered in the 23-3 loss to the Cleveland Browns on Monday night.

"We're still going through the procedures as far as surgery options," Gase said. "So, obviously, we'll have to address our quarterback position from here on out."

Siemian was starting after Darnold was diagnosed with mononucleosis last week. Darnold is expected to miss at least a few more games, but Gase said the quarterback was at the team's facility Tuesday after resting at home all last week.

"He's feeling better, but really it's the doctors letting us know when to proceed with him," Gase said.

Siemian was injured in the second quarter when he threw a long incomplete pass to Ryan Griffin and Cleveland's Myles Garrett slammed into him and fell on top of him — with the quarterback's left leg bending awkwardly under him. The Browns defensive end was penalized for roughing the passer.

Siemian was somehow able to get up under his own power and walk off the field, but very gingerly and with a limp. He was on crutches and his left foot was in a walking boot in the locker room after the game.

"I think all of us were surprised that when you watch it, it wasn't a break, like probably what a lot of us have seen in the past," Gase said. "I mean, it's an ugly looking play. I think there's a good amount of damage to where surgery will be needed and it's going to be time for him to recover."

Falk replaced Siemian and was 20 of 25 for 198 yards in his NFL debut. That came just hours after he was promoted from the practice squad to back up Siemian.

Next, he'll make his first NFL start — against the AFC East rival Patriots, who are 2-0 and have outscored opponents 76-3.

Gase said the Jets are in the discussions stage as far as potential quarterback signings, with general manager Joe Douglas and the scouting staffs sifting through available players.

"We're just trying to figure out what's best for us, especially for this game, for this week," Gase said.

NOTES: Gase said WR Demaryius Thomas (knee/hamstring) and LB Jordan Jenkins (calf) are "week to week" with their injuries. Thomas made his Jets debut Monday night after being acquired from the Patriots last week. He had one catch for minus-1 yard before leaving. ... LB C.J. Mosley (groin) and DL Quinnen Williams (ankle) are day to day after missing the game.