Jets WR Corey Davis out vs. Patriots with knee injury 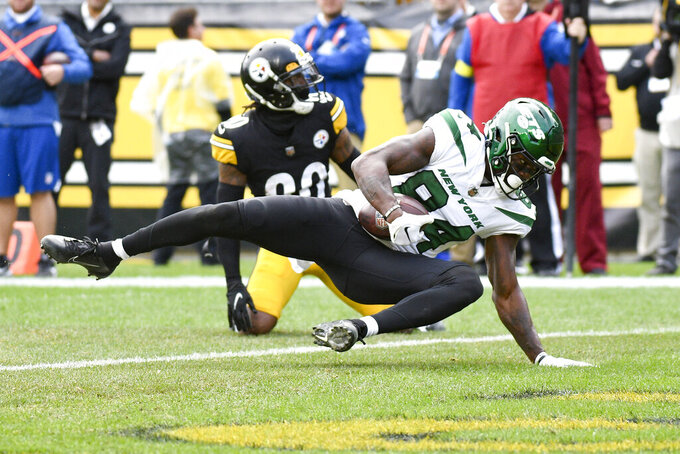 New York Jets wide receiver Corey Davis will miss the game against the New England Patriots on Sunday because of an injured knee.

Davis, who has 19 catches for a team-leading 351 yards with two touchdowns, was hurt in the Jets' 16-9 win at Denver last Sunday. He sat out of practice all week and was ruled out for the game Friday by coach Robert Saleh.

It's a key loss for the Jets, who have won four in a row and at 5-2 are off to their best start since 2010. New York is also looking to end a 12-game losing streak to the AFC East-rival Patriots.

“Losing him, all the different things he does," Saleh said of Davis, “I know from a fantasy standpoint, people don’t see production, but he is by far our most productive guy with what he does in the run game, how violent he is in his play style, and all the big catches he’s made this year.”

Elijah Moore, who was kept home last weekend, will play Sunday so that will help offset the loss of Davis. Moore, who requested a trade last week after being frustrated with the lack of playmaking opportunities in his second season, has practiced all week.

The Jets also have rookie Garrett Wilson, who leads the team with 28 catches, Braxton Berrios, Jeff Smith and Denzel Mims, who made his season debut last week, at the receiver position against the Patriots.

“They’ve all done a really good job,” Saleh said. “They understand their roles and what they've got to get done.”

Mims, a second-round pick in 2020 who also requested a trade during the summer because of his diminished role, had one 4-yard catch on his two targets last Sunday at Denver. He also had a key block on rookie running back Breece Hall's 62-yard touchdown run.

“He’s done a much better job,” Saleh said. “Credit to him with all the things that happened to him during training camp, obviously well-documented. He’s showed up to work and done what he’s asked to do. Now, he’s going to get his opportunity. So, hopefully he takes advantage of it.”

While Davis' injury isn't considered serious, it's the latest setback for an offense that has taken quite a few hits this season — including missing quarterback Zach Wilson the first three games with a knee injury.

Hall is out for the rest of the year with a torn ACL after a terrific start to his rookie campaign. Versatile offensive lineman Alijah Vera-Tucker was also placed on injured reserve this week with a torn triceps.

Left tackle Duane Brown is playing through a shoulder injury that kept him out the first four games. Right tackle George Fant was eligible to return from IR with a knee injury, but remains sidelined. Tackles Mekhi Becton and Max Mitchell are also out with knee injuries.

The defense received some good news, however, with rookie defensive end Jermaine Johnson expected to return after missing two games with a sprained ankle. He was listed as questionable, but fully practiced Friday. Johnson, the third of the Jets' three first-round picks this year, has 12 tackles, 1 1/2 sacks and five quarterback pressures.

NOTES: Saleh said RB James Robinson, acquired this week from Jacksonville, is “coming along good.” But the Jets will determine over the next two days what Robinson's role Sunday will be and how many snaps he plays, if any. ... S Ashtyn Davis (hamstring) was removed from the injury report after fully practicing Friday.