Joe Staley thankful to be back in playoffs with 49ers 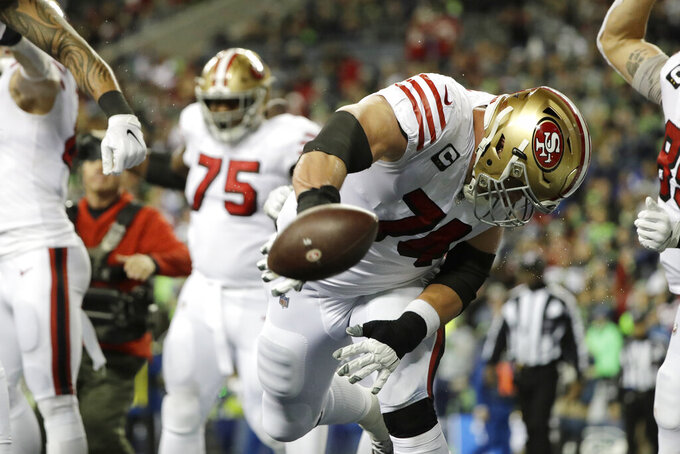 San Francisco 49ers' Joe Staley spikes the football after a touchdown run by Raheem Mostert against the Seattle Seahawks during the second half of an NFL football game, Sunday, Dec. 29, 2019, in Seattle. (AP Photo/Ted S. Warren)

SANTA CLARA, Calif. (AP) — Joe Staley was moved to tears as he ran off the field during the San Francisco 49ers' division-clinching win in Seattle to end the regular season.

Years of lopsided losses to the Seahawks, losing records and an injury-plagued 2019 season when the Niners finally got back to their winning ways had taken a toll on the 35-year-old Staley.

"I was just happy man," Staley said. "There was no reason behind it. It just kind of happened. It kind of surprised me. I was laughing with some guys. 'I don't know why I'm doing this right now.' It was probably just being up there, having a game that mattered and coming out with a victory."

Staley is the only remaining link on the Niners' active roster to the franchise's last playoff run, when San Francisco went to three straight NFC title games and one Super Bowl from 2011-13 under coach Jim Harbaugh.

But Harbaugh was then fired following an 8-8 campaign in 2014. One-and-done losing seasons followed with Jim Tomsula and Chip Kelly and then San Francisco won only 10 games in the first two seasons under Kyle Shanahan.

Now Staley will be on the field when the Niners (13-3) play their first playoff game at Levi's Stadium on Saturday when they host the sixth-seeded Minnesota Vikings (11-6).

Through all those years of successes and failures, the rock on the team was Staley, who played at a high level individually even if that didn't translate to team success.

That all changed this year, even with Staley not able to play his usual big role on offense thanks to a pair of injuries. He broke his leg in a Week 2 win at Cincinnati and then returned eight weeks later to play against the Seahawks.

He struggled in that game dealing with Jadeveon Clowney and also broke a finger that forced him to miss three straight games.

He struggled when he returned in a Week 14 win at New Orleans but has been improving every week as he finds his groove. He played his best game of the year when the division title and top seed in the NFC were on the line last week in Seattle.

He totally neutralized Clowney and was a major part of an offensive line that didn't allow a quarterback hit after the first drive.

"He was unbelievable," right tackle Mike McGlinchey said. "He looked like Joe Staley, again, these last few weeks. He's kind of been building, building, building and got a really good test again. When somebody gets you like Clowney got the two of us on that Monday night game, it does get into your head a little bit, and it was huge for him to get over that hump, not only just for the success of our team but the way that he played and the dominance that he showed on Sunday night was really, really cool and it's a reason why he's the best and why he's been the best for as long as he's been playing."

Staley is a six-time Pro Bowler and was named a second-team All-Pro each year from 2011 to 2013 when the Niners were among the top teams in the NFC.

He maintained that level of play while the team struggled but showed some signs of slippage this season that the Niners believe were more a reflection of injuries and rust than a diminished ability level.

Staley signed a $28 million, two-year extension in the offseason that keeps him under contract through 2021 but there were questions earlier this season if he would last that long.

Staley says those doubters only fuel his desire to keep playing, especially now that the Niners are winners once again.

"I don't know why everybody's been asking me that question," he said. "Because I got injured everybody's like, 'Oh you're gonna be retiring now?' ... I signed another contract here. I still love playing football."