Judge: Maskless Jones and others to be handled internally 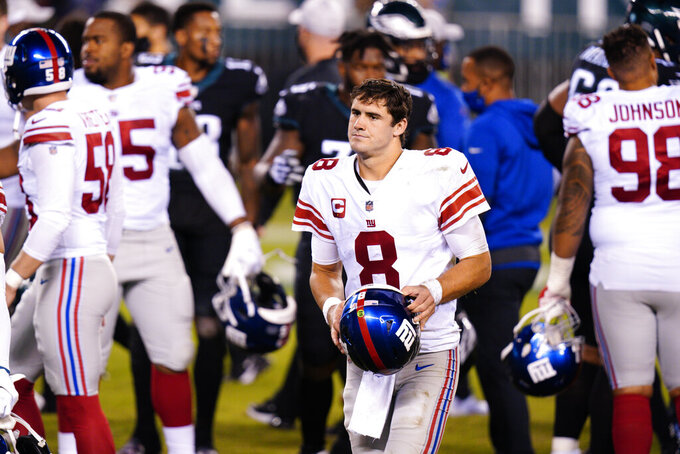 EAST RUTHERFORD, N.J. (AP) — New York Giants coach Joe Judge has spoken with quarterback Daniel Jones and several other players about a video taken last weekend in which they were shown without masks during the current spike in COVID-19 cases.

Judge said he had no problem with the players going out to dinner Friday. However, the rookie head coach refused to say whether there would be repercussions for not wearing their masks.

The 38-year-old said the team would handle the matter internally.

Daniel Jones, injured running back Saquon Barkley, receiver Sterling Shepard and some other players had dinner at a New York City restaurant in private. After it was over, some went to a closed bar at the invitation of the owner. They were filmed there without their masks on.

“I’ve had a lot of in-depth conversations with the guys involved, as well as the rest of the team,” Judge said Tuesday as the Giants (1-6) started preparing for a Monday night game at home against the Tampa Bay Buccaneers (5-2).

“They understand kind of the consequences of anything you do right now in this COVID environment, as well as the public eye, of how they’re looked at and how we have to be careful. We have to make sure we make the right decisions.”

Neither Jones, nor Barkley nor Shepard has talked to the media this week. Jones is scheduled to speak on Thursday and Shepard on Saturday.

Barkley, who is out for the season with a torn ACL in Chicago on Sept. 20, also came under fire. A person resembling him was seen in the video riding a bike in the street.

Judge said the third-year running back has been riding a stationary bike to prepare for his knee surgery. It will probably be done this week in Los Angeles, the coach said.

“I really don’t want to put my energy and time toward that because I know what type of guys they are,” Bradberry said. "I know they go about their business every day and handle it like a pro, so I’m going to let the coaches and whoever upstairs handle that situation.”

The Giants have not had their facility closed or games postponed since reporting to training camp this summer.

“The only thing I’m going to say on that is this group of guys has been very responsible from the very beginning,” Judge said of his team. “They’ve tried to do the right thing the entire time.”