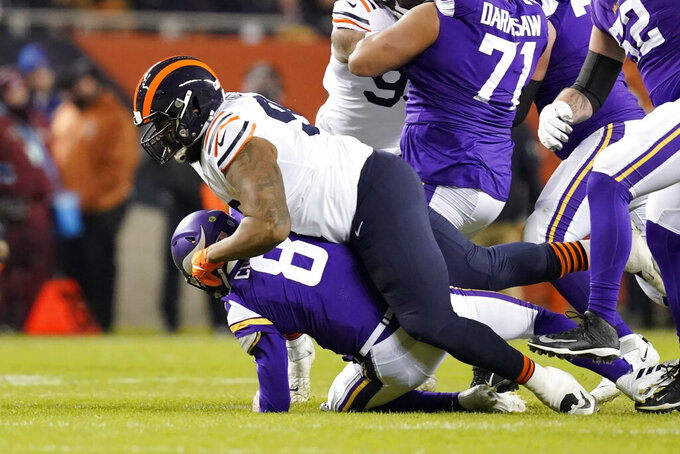 LAKE FOREST, Ill. (AP) — The Chicago Bears close out a 4-10 season without much meaning in the final three games for many players. Younger starters such as quarterback Justin Fields and Darnell Mooney have no problem finding purpose.

The offensive future is all about young players like Fields, who is trying to end a seven-game losing streak as the starter when he faces Seattle. The future of Matt Nagy's coaching staff isn't the huge factor for younger players that it might be with some veterans, especially those on defense.

Fields has specific goals ahead as he goes through limited practice for Sunday's game due to what the team labeled a minor ankle injury.

“Just to end the season off on a good note and bring momentum into the offseason and into next year,” Fields said. “I think we have a lot of young guys playing right now, so it’s a good opportunity for them to be on the field and see what it feels like to play.

“Hopefully we just keep building up the younger guys, getting them more confident with playing and stuff like that.”

Mooney is focused on fortifying the quarterback-receiver relationship with Fields as they prepare to play the league’s worst pass defense. It means doing one thing.

“So go out there and play my game and play as hard as I can.”

Personal goals of many defensive players are less clear.

End Akiem Hicks and linebacker Alec Ogletree have been through their share of lost NFL seasons, so they know the drill.

“I tell some of the guys, I’m like, ‘I’ve had one winning season in nine years of my playing career, and made the playoffs one time in nine years,’ ” Ogletree said. “They can’t believe it, but I tell ’em every day, you can’t take it for granted, because it’s tough. You can go a long period of time, which you think you would never see, to make the playoffs.”

As a result, Ogletree said the Bears should be ready Sunday to play Seattle (5-8) without postseason incentive involved.

“It’s still a kid’s game and you just try to enjoy every day that you get the opportunity to play this game,” Ogletree said.

For Hicks, like for many other players in the league, it’s all made tougher by COVID-19 — he was placed on the list on Thursday after making two sacks Monday against the Minnesota Vikings.

While the Bears' offense continues looking at young players such as tackles Teven Jenkins and Larry Borom, the defense has six key players in their 30s whose fates could be tied to that of GM Ryan Pace and coach Matt Nagy.

A few from the 30-something group could be gone by next year, and it's a crew including Ogletree, Khalil Mack, Robert Quinn, Hicks, Danny Trevathan and Tashaun Gipson.

In fact, Hicks is already prepared for this eventuality after not receiving a contract extension.

Hicks returned from an ankle injury last week and now is on the COVID-19 list. At 32, Hicks said earlier this month he has no plan to retire, so it could mean moving to another team as a free agent for a player who has been part of the Bears' defense in two playoff seasons and has been in Chicago since 2016.

“So sad, so sad, because I’d do anything for them, but that’s the way it goes,” Hicks said.

Hicks thinks it’s possible to find meaning in the final games even for veterans who could be leaving. One obvious way is to prove to other teams they can still play, with free agency coming up in March.

Gipson is the starting secondary player the Bears must decide on, and fourth-year defensive end starter Bilal Nichols is a free agent, as well.

With playoffs out of the question and their futures uncertain, Bears veterans with uncertain futures call pride the main motivating factor.

“You have to be a professional in this league, and we still have a job to do every day to come here and do our best, and go out there and try to win games on Sunday,” Ogletree said. “Yeah, you know you’re eliminated from the playoffs, and I’ve been eliminated far too often and more than I like, but it’s kind of one of those things. It’s tough to make the playoffs.”

NOTES: The Bears had offensive coordinator Bill Lazor and special teams coordinator Chris Tabor back at Halas Hall working after a week away due to COVID-19, so the entire coaching staff is intact. ... They also got quarterback Andy Dalton and defensive lineman Mario Edwards Jr. from the COVID-19 list on Thursday, leaving 10 players on it, including wide receiver Allen Robinson, Nichols and Gipson.