Knack for finishing games not showing up early for Titans 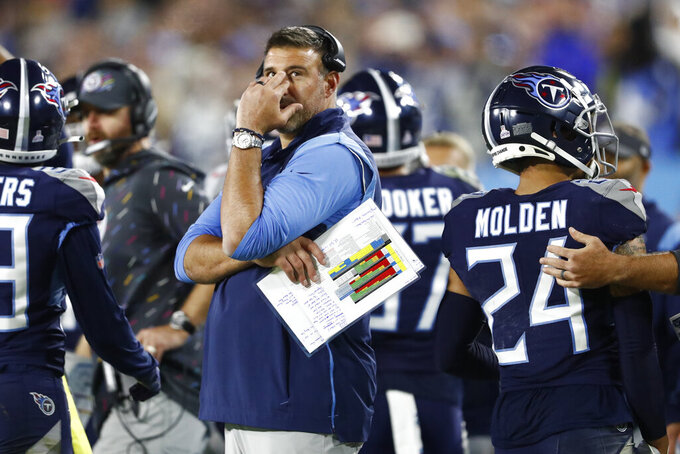 Tennessee Titans head coach Mike Vrabel watches from the sideline in the second half of an NFL football game against the Buffalo Bills Monday, Oct. 18, 2021, in Nashville, Tenn. (AP Photo/Wade Payne)

NASHVILLE, Tenn. (AP) — The Tennessee Titans have a great knack for finishing games. Moving the ball after the opening kickoff is their big problem.

The Titans have scored only 20 points in the first quarter all season and have been shut out in two games. Worse, they've scored only once on an opening drive, settling for a field goal against the Jets, with a trio of three-and-outs.

“We do have to get off to better starts and try to help ourselves early in the game,” Titans coach Mike Vrabel said.

Derrick Henry got the Titans started offensively Monday night with a 76-yard touchdown run in the second quarter. He said Thursday that the Titans just have to be better.

“We have a great offense and guys that go out and make plays, but we just have to put drives together early,” Henry said. “We are stalling. That is all on us. Just going out there, putting a drive together, get a rhythm, getting downfield, getting points, but have just been stalling a lot early.”

The Titans (4-2) have won twice when starting a game with a three-and-out, beating Seattle in overtime and downing the Colts. They also rallied to beat Buffalo on Monday night after trailing 6-0 after the first quarter. They can't afford another slow start Sunday against Kansas City (3-3) which scores 30.8 points a game.

Scoring isn't a big problem for Tennessee. The Titans rank eighth, averaging 27.8 points a game and have topped 33 three times this season.

First-year offensive coordinator Todd Downing doesn't have a set number of scripted plays going into games, focusing more on situations that the Titans might face in the first 10 to 15 plays. He noted the Titans have had self-inflicted issues with penalties and missed opportunities.

“We've all just got to focus on doing our individual job and get the thing going a little bit smoother right out of the gate,” Downing said.

“Sometimes things just aren’t going your way,” Tannehill said. “I think we had some opportunities early in this past game and as a group we didn’t make the plays. It is definitely something we want to improve on.”

Chiefs defensive coordinator Steve Spagnuolo says they've talked about being as concerned about Tannehill as they are Henry, the NFL's leading rusher.

“All the focus goes on 22 because of who he is and what he does, and yet you can’t lose focus of what you all have been talking about, the two wideouts they got out there, the quarterback will tuck and run with it,” Spagnuolo said.

The Titans are working to fix their early game struggles.

“We don’t want to have that to keep occurring week after week,” Henry said.

NOTES: WR A.J. Brown (illness) missed a second straight practice. LT Taylor Lewan (concussion) and WR Chester Rogers (groin) also did not practice. Henry was given the day off for rest. OLB Bud Dupree, who wasn't on Wednesday's injury report was limited with his knee.

By Steve Megargee 1 minute ago
By Josh Dubow 15 minutes ago
By Rob Maaddi 23 minutes ago
an hour ago
By Teresa M. Walker an hour ago