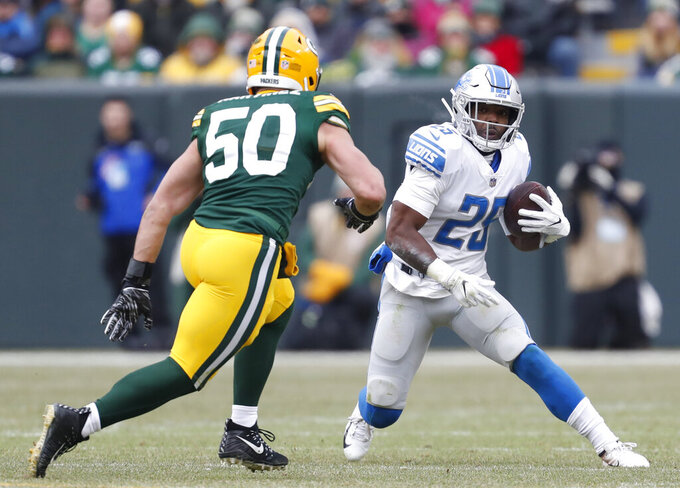 ALLEN PARK, Mich. (AP) — The Detroit Lions are moving on from one of their mainstays in the backfield.

The Lions officially announced the signing of defensive lineman Mike Daniels on Saturday, only part of the day's story. Detroit also released running back Theo Riddick after six seasons with the team.

"Obviously, bringing in Mike, we needed to find a spot," coach Matt Patricia said. "Theo obviously is a great professional. He's a great player. He did a lot of great things for us through the course of the years. We have all the respect in the world for everything that he's done, but in many of those situations, we're just going to try to do what's best for the team."

Daniels wasn't at practice yet Saturday, but he joins a defensive line that could be a real strength for Detroit. Replacing Riddick will be an interesting challenge, however. He was second on the Lions last season with 61 receptions. He also rushed for 171 yards on 40 carries.

Riddick has been a valuable pass catcher. He has 285 receptions in his career, including a career-high 80 in 2015. But rookie Kerryon Johnson boosted the Lions' running game last year, and Detroit also added C.J. Anderson to the backfield this offseason. Adding to the uncertainty: The Lions have a new offensive coordinator in Darrell Bevell.

"There are different creative ways that we can get some of that production from other players, different personnel groups, maybe different sets, different looks, and we will explore that as we go through training camp and find out who can do it the best and help us and produce in those areas," Patricia said. "Certainly, some of the players you saw on the field last year that were able to do some of those things in the passing game, coming out of the backfield, we expect them to do that again this year as well."

In addition to Johnson and Anderson, running back Zach Zenner remains with the Lions after playing in 36 games over the past four seasons. Zenner is plenty familiar with life on the roster bubble, but even so, he said the news about Riddick was a bit of a shock.

"As a unit, we're thinking about coming out, having a good practice, so it's always a surprise. But I know that they're trying to do what's best for the team," Zenner said. "He's going to be missed. I wish him the best of luck moving forward."

The Lions also drafted running back Ty Johnson in the sixth round out of Maryland, and he received some praise from Patricia on Saturday.

"He has really good speed and quickness, but he also works really hard at the game," Patricia said. "Everyone's at the ground level, so it's easy to compare everybody, as opposed to maybe a vet that has been in an offensive system for five or six years who has so much of a head start over a young guy. I would say that his ability to keep pace with everything that we're putting in right now has been on track with everybody else."

The 30-year-old Daniels, a former Pro Bowler, was released earlier in the week after seven seasons with Green Bay. Daniels started nine games for the Packers last season.