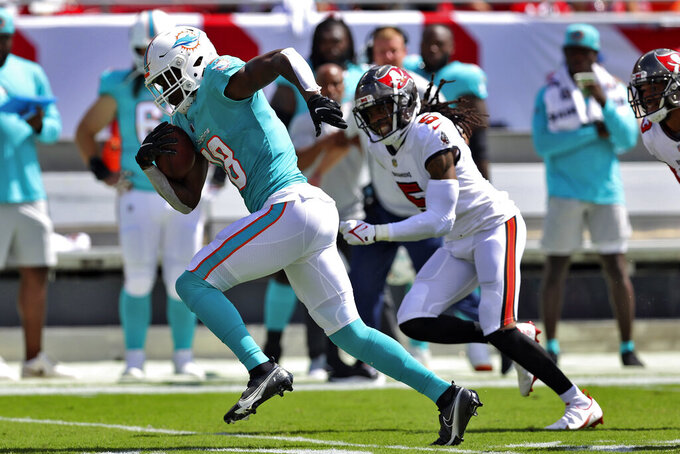 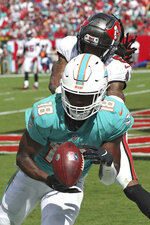 MIAMI GARDENS, Fla. (AP) — The bad comes in bunches for the Miami Dolphins.

At some point in each of the past four games, there has been a stretch where the Dolphins have given up at least 20 unanswered points.

Not surprisingly, they’ve lost all four, including Sunday’s 45-17 debacle at Tampa Bay that sent Miami three games behind Buffalo in the AFC East race.

“We’ve got a group that sticks together, that supports each other, that understands and knows how hard they work, how hard they prepare,” Dolphins coach Brian Flores said Monday. “We’re just not getting the results that we want right now.”

There’s only one team in the AFC with a worse record than Miami. That would be the Jacksonville Jaguars, losers of 20 consecutive games, and they will be the opponent for the Dolphins this Sunday when the teams meet in London.

And if that wasn’t enough reason for hope, the Dolphins might get quarterback Tua Tagovailoa back this week. Tagovailoa has missed almost four full games — he was hurt in the second series of Week 2 against Buffalo — with fractured ribs and is eligible to come off injured reserve this week.

Tagovailoa threw some passes on Monday, continuing to ramp up his rehab and recovery.

“He’s definitely making progress,” Flores said. “We’ll kind of take this day to day, but we’re hopeful that he can practice this week.”

But three of Miami's next four games are against teams in similar positions: Jacksonville (0-5) awaits this week, then the Dolphins return home to face Atlanta (2-3).

A trip to Buffalo — the Bills are simply owning the Dolphins these days — awaits on Oct. 31, to be followed by a matchup with Houston (1-4). And when that stretch is over, Miami will still have two games with the Jets and another with the New York Giants.

Things can be fixed. Maybe.

“Obviously, the cliché is, ‘It’s early in the season, but it really is,’” said quarterback Jacoby Brissett, who has held the role with Tagovailoa sidelined.

“We have a lot of football ahead of us and we can’t focus so much on the results. It’s just more so getting better each week and in which I think we are. I continue to say it, but we actually are getting better.”

Brissett. Give him credit for the effort against the Bucs: 275 yards, 27 for 39 passing, two touchdowns, one interception. And he played much of the game while clearly laboring through a hamstring issue.

The secondary. This was supposed to be the strength of the defense and it was a disaster on Sunday. Tom Brady embarrassed Miami by completing 30 of 41 passes for 411 yards and five touchdowns. Yes, he’s Tom Brady. But that was still the first 400-yard, five-TD game of his career, and he was relentless.

RB Myles Gaskin. He had 10 catches (on 10 targets) and two touchdown grabs, one of the very few bright spots for the Dolphins.

Everything else. Through five games, there’s nothing that the Dolphins can point to as something that’s been reliable or dependable on a weekly basis.

Tagovailoa throwing on Monday is a good sign, though the biggest indicator of this week’s plan for him will likely come Wednesday at practice. TE Adam Shaheen (knee) is considered day to day for now, and the Dolphins are unclear how much he will be available this week.

Off to London the Dolphins go this week, jetting over Thursday night to face the Jaguars there on Sunday.