Morris has share of Falcons' mistakes in yet another loss 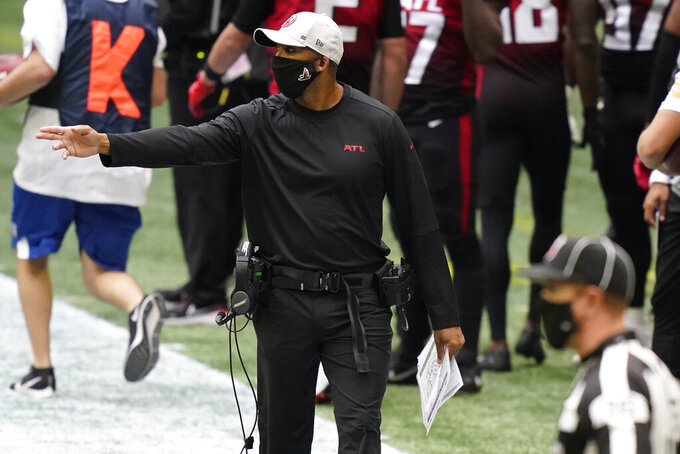 ATLANTA (AP) — Raheem Morris wants the Atlanta Falcons to learn to “force our will on our opponent.”

First, the Falcons must find the will to avoid crucial mistakes that have led to loss after loss. Following Sunday's 23-22 defeat by the Detroit Lions, Morris accepted responsibility for some of those blunders.

Atlanta's most glaring mistake was Todd Gurley failing to fall down short of the goal line late in the game when the Lions were trying to let the Falcons score. But Morris, in his second game as interim coach, also pointed to his own decisions earlier in the game.

Morris second-guessed himself for leaving his offense on the field on a fourth-and-5 play at the Lions 13 early in the fourth quarter when the Falcons led 14-13.

Instead of attempting a short field goal that would have pushed the lead to four points, Matt Ryan threw a short pass to backup running back Ito Smith that was deflected by defensive end Trey Flowers.

“Just being aggressive,” Morris said, adding the decision to go for the first down “on these fourth-and-medium situations” was made before the game.

Those lost three points looked especially big at the end of the game as the Falcons (1-6) moved closer to a third consecutive losing season.

“Obviously looking back you wish you took the three, but we didn’t," Morris said before repeating his goal to “be aggressive.”

Ryan was obviously excited when Morris left the offense on the field.

“It’s your job to go out and make the play come to life. We’ve got to a better job,” Ryan said.

Morris challenged an 18-yard catch by Kenny Golladay in the fourth quarter. The review confirmed the catch was good, forcing Atlanta to lose a crucial timeout. Morris already had taken a timeout with his defense on the field early in the second half.

Another fourth-quarter mistake came when Atlanta’s defense was penalized for having 12 men on the field, extending a Lions drive that ended with a missed field goal by Matt Prater. Linebacker Deion Jones was late leaving the field.

“I don’t know if it was a substitution mix-up,” Morris said. “It was just a personnel deal.”

The Falcons have little time to make corrections before they play at Carolina on Thursday night.

Perhaps the biggest challenge for the Falcons is simply learning how to hold a lead. Atlanta opened the season with five consecutive losses and became the first team in NFL history to lose consecutive games after leading by at least 15 points in the fourth quarter.

Now, with Morris trying to prove he deserves to be considered as Quinn’s full-time replacement, more fourth-quarter misery led to yet another loss, capped by Matthew Stafford's 11-yard scoring pass to tight end T.J. Hockenson in the final seconds.

“We’ve got to be better finishers,” Morris said. “We’ve got to find ways to finish the game better and we did not do it today.”

A big part of that was Gurley's inability to keep himself from scoring. By falling into the end zone with 1:04 remaining instead of stopping at the 1, Gurley opened the door for the Lions' last-minute touchdown drive.

Detroit led 16-14 before Gurley's ill-fated run. He broke through the line of a generous Lions defense that was more than happy to allow the touchdown. Gurley stumbled, tried to stop himself and then fell on the goal line.

Morris said players were told the Lions would try to allow the touchdown.

“We knew that was kind of going to be their ideal choice for us to get in the end zone so they could have a chance to go down there and score," Morris said. "We wanted to take a knee at the 1. Obviously he tried and fell in the end zone at the last minute there. He got tripped up a bit.”

Morris said his postgame message to his players was “no excuses.”