Murray back at practice, Cardinals prep for Panthers 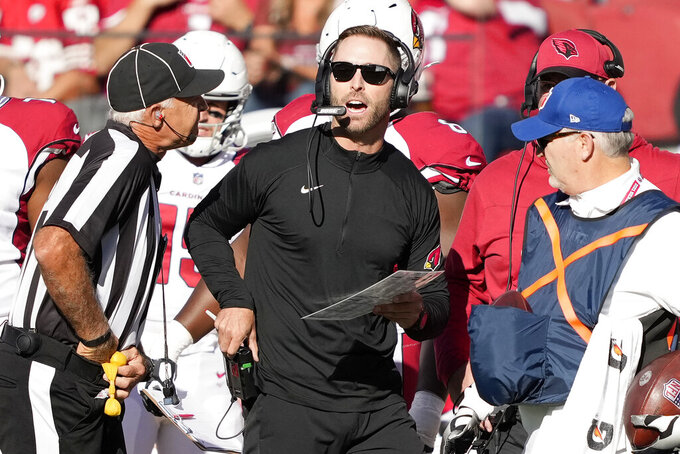 TEMPE, Ariz. (AP) — Quarterback Kyler Murray was back at practice on Friday, potentially giving the Arizona Cardinals a boost heading into Sunday's home game against the Carolina Panthers.

Murray missed a game for the first time in his three-year career last weekend against the San Francisco 49ers because of an ankle injury. Backup Colt McCoy played well in Murray's absence, completing 22 of 26 passes for 249 yards and a touchdown in Arizona's 31-17 victory.

But there's no doubt Arizona's offense is more versatile with Murray, who is always a threat to run. The 24-year-old quarterback is one of the league's top MVP candidates through the first half of the season, completing nearly 73% of his passes for 2,276 yards, 17 touchdowns and seven interceptions. He's also run for three touchdowns.

Kingsbury didn't commit to playing Murray on Sunday, but said the quarterback is trending in the right direction.

“He's progressing, it's good to have him out there,” Kingsbury said. “We'll see how he feels tomorrow, Sunday, and go from there.”

The Cardinals have the NFL's best record at 8-1 but have been dealing with a crush of injuries over the past weeks. The team's injury report had 12 players out and four more limited on Wednesday. That's nearly a third of the active roster.

But they're starting to get a little more healthy. Kingsbury said starting safety Budda Baker (concussion/knee) is expected to play, and assistant head coach/special teams coordinator Jeff Rodgers is expected to be on the sideline after spending time in COVID-19 protocol.

The Cardinals are still waiting to see if star receiver DeAndre Hopkins can play Sunday. The three-time All-Pro is battling a hamstring injury and missed the 49ers game. It was just the third game he's missed in his nine-year NFL career.

Kingsbury said the Cardinals were being particularly cautious with Hopkins because it's a soft tissue injury.

“Obviously, you don't want to lose somebody like that for an extended period of time if you can help it,” Kingsbury said. “He hasn't missed many games in his career, so we want to make sure when he's back, he can 100% do everything he does.”

Kingsbury joked that while it was nice to have Murray back at practice, the quarterback is “not that fun to be around currently” because he wants to play so badly. The coach wants that, too, but he also needs to see a certain level of mobility.

“Just that he can move well enough to protect himself,” Kingsbury said. ”He doesn't have to be 100%, but he's got to be able to protect himself and do what he does, escape, extend plays, things of that nature."