With new GM, coach, Bears focus on getting most from Fields 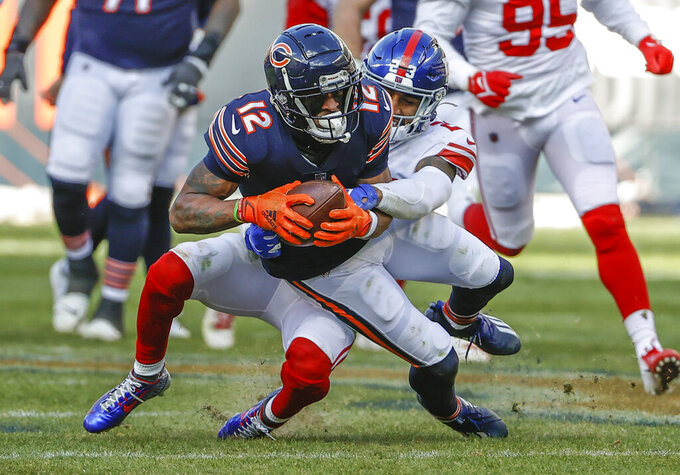 FILE - New York Giants safety Logan Ryan (23) tackles Chicago Bears wide receiver Allen Robinson (12) during the second half of an NFL football game Jan. 2, 2022, in Chicago. Robinson could be on his way out after going from back-to-back seasons with more than 1,100 yards to finishing with 410 playing under the franchise tag. (AP Photo/Kamil Krzaczynski, File)

NEEDS: The Bears opted to make sweeping changes after missing the playoffs for the ninth time in 11 years. And they swung a huge deal Thursday, agreeing to send star pass rusher Khalil Mack to the Los Angeles Chargers. It's the first major roster move since general manager Ryan Poles and coach Matt Eberflus were hired to replace the fired Ryan Pace and Matt Nagy. The new regime needs to surround QB Justin Fields with the pieces to help him grow following a shaky rookie season, and a big part of that will be solidifying the wide receiver spot. Robinson could be on his way out after going from back-to-back seasons with more than 1,100 yards to finishing with 410 playing under the franchise tag. Darnell Mooney had 1,055 yards, but he and Robinson were the only Bears wide receivers with more than 329 yards. Chicago ranked 30th in passing and 24th in total offense.