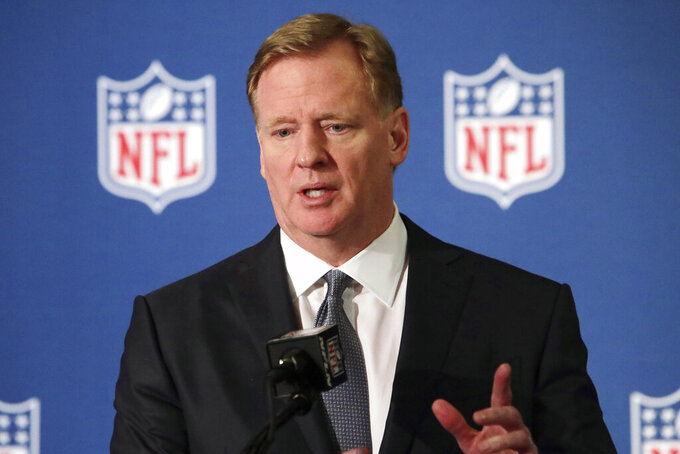 FILE - In this Dec. 12, 2018, file photo, NFL commissioner Roger Goodell speaks during a news conference in Irving, Texas. The NFL, which has raised $44 million in donations through its Inspire Change program, announced the additional $206 million commitment Thursday, June 11, 2020, targeting what it calls “systemic racism” and supporting “the battle against the ongoing and historic injustices faced by African Americans.” (AP Photo/LM Otero, File)

The NFL plans to recognize Juneteenth as a league holiday.

NFL Commissioner Roger Goodell made the announcement to league employees on Friday in an internal memo obtained by The Associated Press.

Juneteenth is considered the oldest known celebration commemorating the ending of slavery in the United States. It was originally celebrated on June 19, the day that Union soldiers in 1865 told enslaved African Americans in Galveston, Texas, that the Civil War had ended and they were free.

“This year, as we work together as a family and in our communities to combat the racial injustices that remain deeply rooted into the fabric of our society, the NFL will observe Juneteenth on Friday, June 19th as a recognized holiday and our league offices will be closed,” Goodell said in the memo. “It is a day to reflect on our past, but more importantly, consider how each one of us can continue to show up and band together to work toward a better future.”

On Thursday, the NFL announced it is committing $250 million over 10 years to social justice initiatives, targeting what it calls “systemic racism” and supporting “the battle against the ongoing and historic injustices faced by African Americans.”

Last week, Goodell in a video denounced racism, apologized for not listening to players sooner and promised to support their peaceful protests against police brutality and racial injustice. Colin Kaepernick began raising awareness for these problems by kneeling during the national anthem in 2016.

George Floyd’s death has ignited nationwide protests and sparked players and leaders to push for change.

“The power of this historical feat in our country’s blemished history is felt each year, but there is no question that the magnitude of this event weighs even more heavily today in the current climate,” Goodell said in the memo. “Juneteenth not only marks the end of slavery in the United States, but it also symbolizes freedom — a freedom that was delayed, and brutally resisted; and though decades of progress followed, a freedom for which we must continue to fight.”