Nick Foles to start at QB for Bears against Seattle 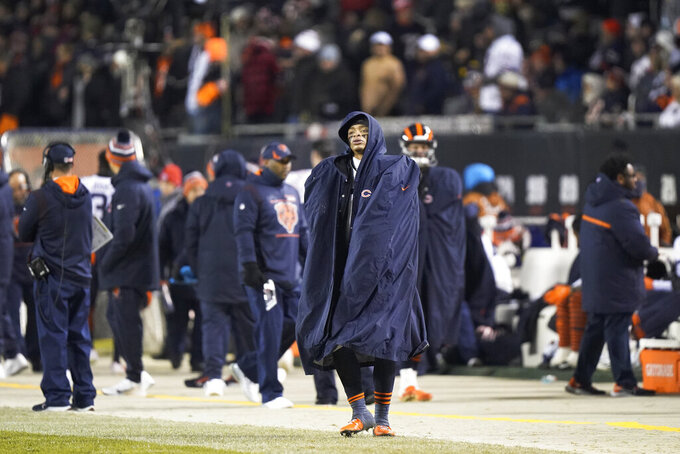 Starting QB Justin Fields suffered an ankle injury on Monday night against Minnesota and missed practice Thursday and Friday. Chicago's other QB, Andy Dalton, has been out with a groin injury that happened just before he went on the reserve/COVID-19 list last week.

Foles started seven games last year for the Bears, but hasn't played since Week 10 of last season when he got a hip injury other than a relief appearance last December in a win over Jacksonville. Foles also was named Super Bowl LII MVP with Philadelphia.

Chicago coach Matt Nagy said Friday that recently acquired Ryan Willis could be the QB backup if Fields' ankle hasn't healed enough for him to play in case of an injury to Foles.

“His injury has not gotten worse since the beginning of the week, it’s getting better,” Nagy said.

Dalton is off of the COVID-19 list, but Nagy said the groin injury “started feeling a little bit worse” after a practice this week.

“I know just the practice we came from right now he really was out there doing a lot of good things,” Nagy said. “You can see the timing.”

Defensive end Bilal Nichols has returned from the reserve/COVID-19 list. ... Also out for Sunday’s game are Jason Peters (ankle), Xavier Crawford (concussion) and Jakeem Grant. ... Marquise Goodwin and Eddie Goldman are questionable, although both have been able to go through full practices the last two days.