Panthers, off to 2-0 start, visit Texans in prime time 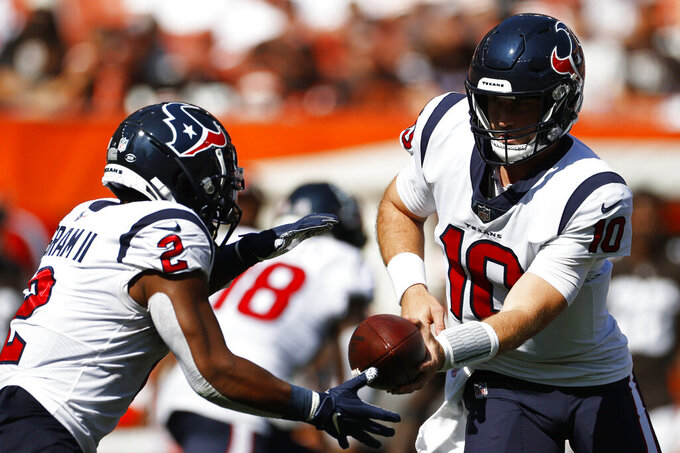 Houston Texans quarterback Davis Mills (10) hands the ball off to running back Mark Ingram (2) during the second half of an NFL football game against the Cleveland Browns, Sunday, Sept. 19, 2021, in Cleveland. (AP Photo/Ron Schwane)

In an effort to get every team a Thursday game, NFL schedule makers often take some of the likely tail-enders and stick them in early season games.

Sort of a “let's get them out of the way before they've lost a lot” philosophy.

It's unlikely those folks expected an undefeated Carolina Panthers when they were put in the Week 3 prime-time match against Houston, which is almost as surprisingly 1-1.

So everyone should be happy with this matchup, right?

Well, there's enough interest, first because with the Texans minus their stand-in starting quarterback, Tyrod Taylor, out with a hamstring issue, won't be turning to their in-limbo star and former starter, Deshaun Watson. He's been inactive so far after 22 women filed lawsuits alleging sexual assault or harassment.

So rookie Davis Mills goes for Houston after stepping in for Taylor last week in a loss at Cleveland.

“Other than the first drive, I don’t think he was really that uncomfortable on Sunday, and that’s probably to be expected for a guy that’s come in," offensive coordinator Tim Kelly said. "That’s not an easy place to play, and the situation was tough being backed up like we were. So I thought he did a good job of settling down, and really, he put us in a spot to make it a one-score game with just over two (minutes) to go."

Carolina (2-0) comes off a beatdown of New Orleans and is tied with Tampa Bay atop the NFC South. The Panthers have been holding sack parties so far.

Look for the Panthers, ranked 10th in the AP Pro32, and 8-point favorites over No. 27 Houston, to give Mills fits.

KNOCKOUT POOL: Cleveland made it tighter than it should have been, but we survived to pick DENVER this week.

Teddy Bridgewater was once Jets property. Now he will tear them down.

This worked for us in Week 1, and the Steelers have a bunch of key injuries.

It makes no sense to bet against that 44-year-old quarterback and his Bucs crew. Call us nonsensical.

WE BELIEVE. At least this week, Pro Picks believes in the Raiders with Miami undermanned.

That KC defense is worrisome. But Patrick Mahomes won't get intercepted in a key spot again.

That Ravens D is worrisome, too. Somehow, Baltimore will hold on.

Well, not all of them.

After two victories in the Eastern time zone, the Niners get a home game. And ...

Thought about this as Best Bet, but still not sure about Buffalo.

Also not sure what the Browns are. Surely talented, but mystifying.

Early battle for AFC South lead, and the Colts have a ton of issues.

Early battle for the NFC East lead. More like a pillow fight.

This week's only matchup of winless clubs. The Falcons have looked worse.