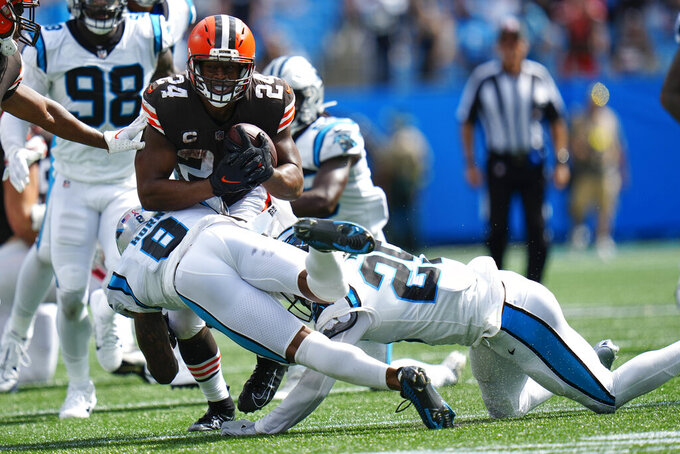 Cleveland Browns running back Nick Chubb is tackled by Carolina Panthers cornerback Jaycee Horn during the second half of an NFL football game on Sunday, Sept. 11, 2022, in Charlotte, N.C. (AP Photo/Rusty Jones)

It’s the two words Panthers defensive coordinator Phil Snow has been preaching all this week to his players after Carolina allowed 217 yards rushing in a 26-24 loss to the Cleveland Browns in Week 1.

Nick Chubb bullied his way to 141 yards on the ground against Carolina and the Browns averaged 5.6 yards per carry — not a good start for the Panthers.

This Sunday the Panthers get another stiff test when they travel to face a healthy Saquon Barkley and the New York Giants. Barkley, who has struggled with injuries the past two seasons, ran for a league-high 164 yards in New York’s come-from-behind 21-20 win over the Tennessee Titans in the season opener.

“We've really worked on taking better angles to the ball and wrap and roll,” Panthers linebacker Damien Wilson said. “All the basic tackling mechanics. I feel like taking the right angle is about 70% of it, then 20% contact and 10% driving your feet.”

Carolina missed 18 tackles overall against the Browns, resulting in 190 yards after contact.

Snow said the Panthers will “have their hands full” with Barkley, who is quicker than Chubb — meaning taking the correct angle is all that much more important.

“The thing that is scary about him is he can make 60- and 70-yard plays,” Snow said. “Chubb makes a lot of 6- to 20-yard plays, right? But Barkley can go 70 on you in a hurry. So we've got to be really detailed in what we do and in our angles with tackling Barkley.”

Snow is preaching a back-to-basics philosophy this week.

“Some of it is angles, and trusting each other and running the right angles,” Snow said. “Some of it too is the (running) back. Chubb is hard to tackle. If you don't hit him square it's hard to bring him down. And he really ran well in our game.”

The Giants have more a downhill running game, whereas the Browns attacked Carolina on the edges. That presents more of an issue for Carolina's interior defensive linemen Derrick Brown and Matt Ioannidis.

“ Barkley is obviously a talented back, and every team has one it seems,” Ioannidis said.

Snow said getting more people to the ball is imperative.

“They are hard to stop," Snow said. "The Titans play good defense and (the Giants) ran for 238 yards against them. The thing you can't let them do is control the game with it. They are going to make some yards running.”

Panthers coach Matt Rhule said Barkley looked “as good as he's ever looked” against the Titans after missing all of the 2020 season with an ACL injury and playing only in part of last season.

The Panthers (0-1) want to make sure they aren't labeled as a bad run defense — and feel this is the time to make a statement.

Carolina was second in the NFL last season in pass defense, but finished in the middle of the pack against the run, allowing 113.8 yards per game on the ground. However, they only allowed 4.1 yards per carry, which was tied for eighth in the league.

“I think this is a good opportunity for our defense to go out there and shut down the run and set the tone for what the next 16 games can look like for us,” Ioannidis said.

NOTES: With returner Andre Roberts out two months with a knee injury, Rhule said that wide receiver Shi Smith will handle punts and running back Chuba Hubbard will return kickoffs.