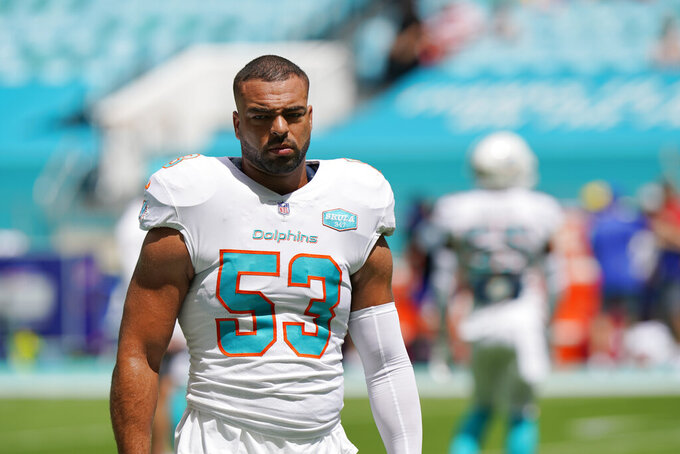 BOSTON (AP) — Linebacker Kyle Van Noy is returning to the New England Patriots after one year with the Miami Dolphins.

Van Noy confirmed reports that he was returning to Foxborough on a two-year, $13 million deal in a short video posted on Twitter.

“Pats Nation, I'm back. Let's get it!” Van Noy said in the video, which also featured an image of the Patriots team logo.

New England also continued to add depth to its run defense by reaching an agreement with former Packers defensive end Montravius Adams. His agent, Drew Rosenhaus, confirmed that the one-year contract has a maximum value of $2.5 million. Adams appeared in 45 games in four seasons for Green Bay, with 44 tackles and 1 1/2 sacks.

The Patriots ended the day by completing a trade with Houston, sending tight end Ryan Izzo to the Texans for a 2022 seventh-round draft pick. The move came just days after the Patriots reached agreements with two of the most sought-after free agents at the position.

“Yessssir! Pumped to be a Patriot! Can’t wait to get this thing rolling. Let’s Goo baby!” Henry wrote.

The trade marked the first deal between New England and Houston since former Patriots director of personnel Nick Caserio left in the offseason to become the Texans general manager.

Van Noy joined the Patriots in 2016 after spending his first two NFL seasons in Detroit. He came into his own over the next three seasons, with 16 1/2 sacks, starting 43 games and becoming an integral part of a New England defense that shined on the way to Super Bowl wins in the 2016 and 2018 seasons.

He left for Miami in free agency in the 2019 offseason, signing a four-year, $51 million deal to play for Dolphins coach and former Patriots assistant Brian Flores. He picked up where he left off in New England in 2020, with six sacks in 14 games.

But his contract made him a salary cap casualty and he was released last week, opening up the opportunity for him to reunite with the Patriots.

He should be in line to resume his previous role playing on the edge alongside linebacker Dont'a Hightower, who is returning after opting out in 2020, and newly acquired edge rusher Matt Judon.

They will be tasked with helping the Patriots be more active in the pass rush in the 2021 season. New England had just 24 sacks last season, which ranked 26th in the NFL.